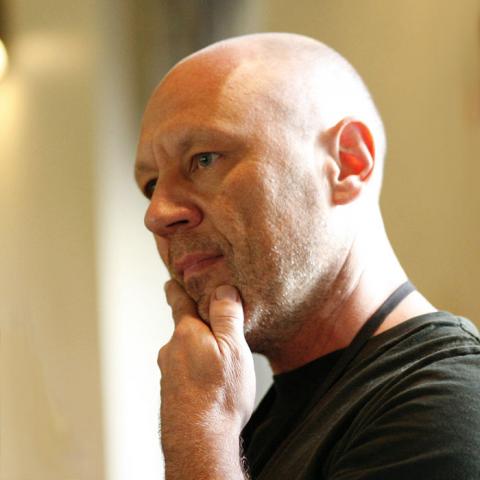 John Muse is currently Assistant Professor of Visual Studies at Haveford College. From 2012 to 2013 he was the Postdoctoral Fellow in Visual Studies at the John B. Hurford Center for Arts and Humanities. From 2009 to 2012 he served as Visiting Assistant Professor of Comparative Literature and the Center's Exhibitions Faculty Liaison. He was the Center's 2007-2009 Mellon Post-Doctoral Fellow.

His single-channel videotapes and multi-media installations have been exhibited throughout the United States and Europe.  In 2009 he and frequent collaborator, Jeanne C. Finley, were featured artists at the Flaherty Seminar curated by Irina Leimbacher. In 2001 Muse and Finley received a Rockefeller Foundation Media Arts Fellowship for their experimental documentary project, Age of Consent. In 1999 they received a Creative Capital Foundation Award. In 1995 they received Artist in Residence fellowships from the Xerox Palo Alto Research Center. The Patricia Sweetow Gallery in San Francisco represents his installation works, and the Video Data Bank distributes his single-channel works.

In 2006 he received a Ph.D. in Rhetoric from U.C. Berkeley. His dissertation, The Rhetorical Afterlife of Photographic Evidence, co-chaired by Judith Butler and Kaja Silverman, analyzes Roland Barthes' numerous writings on photography, an artwork by Roni Horn entitled Another Water (the River Thames, for Example), and an essay by Avital Ronell on the videotaped beating of Rodney King, “TraumaTV: Twelve Steps Beyond the Pleasure Principle.” Muse shows how these works to promulgate rather than reduce a crisis of the evident.

His research interests include photography, film, and contemporary art. He works within the traditions of rhetorical theory and continental philosophy, concentrating on semiotics, phenomenology, and psychoanalysis.