The building, which houses two of Haverford's most popular majors (biology and psychology), has been under construction since May 2016 to make much-needed infrastructure updates and to create space for collaborative learning and research.

When students returned to campus from winter break, they were greeted by a new old friend. After roughly eight months of construction, Sharpless Hall, the campus' home for psychology and biology, was reopened. Over the last week, faculty members, who had been relocated to spaces across campus for the summer and fall semester, moved into their new offices. And on Jan. 17, many students took their first classes in the newly updated building, which has been outfitted with glass walls around seminar rooms and offices to encourage natural light from the building's original windows to flow through the space.

"We worked closely with the architects to design the labs to meet our research specifications and ethos of collaboration," says Professor of Biology Rob Fairman. "Overall, the design accomplishes this, and actually increases the lab footprints through judicious placement of offices, labs, and classrooms. The new classroom on the first floor has a welcome adjacency to the introductory biology teaching lab, allowing us to hold pre-lab lectures right next door."

Fairman says the renovations—the first in Sharpless since the 1960s—have created "improved adjacencies," meaning that functions critical to his work now are closer to his lab, making for a more efficient workflow. He also notes that the pairing of research labs into a cohesive research space allows faculty to better share resources—an important element for the degree of collaboration expected of thesis students across labs.

"The building has transformed from a dreary and outdated space to one that is welcoming, functional, and cozy," says Brett Pogostin '18, a chemistry major with a biochemistry concentration who stopped in to check out the upgrades on Tuesday. "The study spaces of all different sizes sprinkled throughout the building offer opportunities for collaboration, which is a critical part of the natural sciences. I imagine I'll spend many late nights with my 'Quantum Chemistry' classmates in one of the study rooms, huddled around one of the new wooden tables, finishing problem sets."

In addition to all of the attention given to collaborative learning and research in the renovations, the construction also includes long-overdue infrastructure updates. With this work finished and building now inhabited, the Marian E. Koshland Integrated Natural Science Center, which houses all the natural science departments in one contiguous complex, is now complete.

"We launched the renovation of Sharpless with two distinct purposes in mind: creation of an efficient, state-of-the-art home for scientific investigation, and revitalization of the building's original architectural dignity," says President Kim Benston. "This beautiful renovation has achieved both aims. Today's Sharpless proudly anchors its corner of our historic academic quad, even as it completes the high-tech infrastructure of our vibrant natural sciences center. No longer a tired, passive venue, Sharpless has been redesigned to advance the world-class collaborative learning taking place in biology and psychology. It now matches the caliber of discipline-based and interdisciplinary teaching and research conducted within its walls."

Move-in day was a welcome day for all, and, for some, it was also emotional. Psychology Department Chair Jennifer Lilgendahl was almost moved to tears.

"I nearly cried, I was so impressed and excited," Lilgendahl says of her first impression of the space. "When I interviewed at Haverford, back in 2006, I remember how impressed I was with the faculty and the students and how much I loved the philosophy of the College and the beauty of the campus. However, I also remember thinking that Sharpless was disappointingly rundown. Obviously, all the other wonderful qualities of the school brought me here, but to see this renovation happen, and to know I get to work in this beautiful new space for the rest of my years at Haverford is very, very exciting."

The psychology faculty, she says, now have lab spaces tailored to their different research needs, and their students now have a designated on-site lounge, where they can gather and collaborate on projects. (Prior to the renovations there was no room for such a communal space.) "I am hopeful," she says, "that our beautiful and spacious student lounge area will have a powerful impact on our psychology majors and strengthen their sense of connection to our department."

The renovations of Sharpless are a part of the College's Lives That Speak campaign, a $225 million affirmation of Haverford's academic excellence and historical commitment to the value of an ethical life. Dr. James L. Boyer '58, the Ensign Professor of Medicine at the Yale University School of Medicine, supported the Sharpless project specifically because he hopes the state-of-the-art facility will help to continue the legacy of scientific excellence at Haverford and will entice the best and the brightest aspiring scientists to attend the College.

"The most important experience for me at Haverford was my independent research project in my major, biology, in my senior year, [which was] done in Sharpless," says Boyer. "That was my first experience with basic research, and I enjoyed it. It also resulted in my name on a publication with my professor, Mel Santer, and his wife [Ursula Santer]. That paper was a powerful stimulus for me to later pursue an academic career in medicine. So when Sharpless was slated for total renovation and was a major part of the campaign, my wife and I agreed that it was important for us to support this effort on behalf of the next generation of science students at the College."

Boyer is also hopeful that the space's new reliance on glass partitions will help make science more accessible—both literally and figuratively—to the non-scientist visitors to the building.

Professor Fairman was likewise excited about all of the glass in the remodeled building and how it—along with the new green paint on the walls—allows the College Arboretum outside to permeate Sharpless' interior. He was also enthused about another collaboration with the Arboretum—the creation of some beautiful new seminar tables made from reclaimed wood from a giant sequoia that had to be cut down in the campus Pinetum. "Wait until you see the tables!"

A ribbon-cutting ceremony and reception for the renovated building will be held on Feb. 10, at 5:00 p.m. in Zubrow Commons. All are welcome.

A peek inside the renovated space: 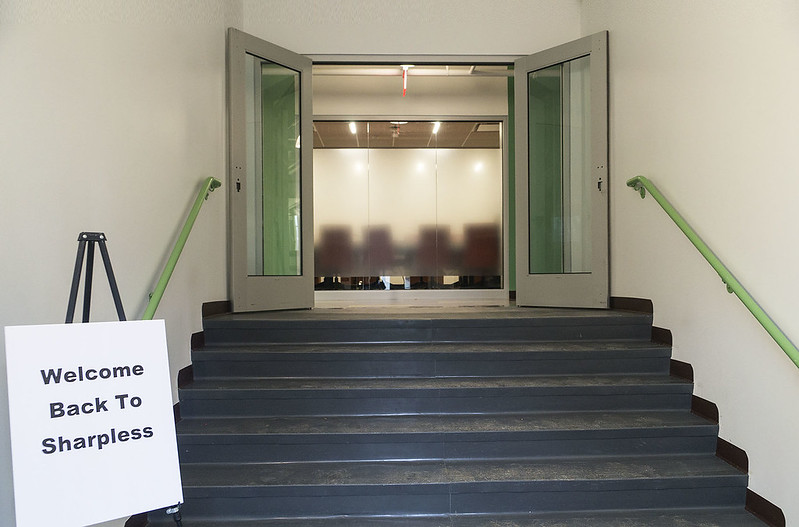