A student shares her research with a panelist and President Kim Benston. Photo by Leigh Taylor

More than 150 Haverford students, alumni, and staff attended the two-day symposium, which was supported by Haverford’s Initiative in Ethical Engagement and Leadership.

Pushed by the idea that new technologies are essential and accepted for the good of all, society has seen “mind boggling and breath-taking” advances, from oil pipelines that span continents to gene therapies for fetuses, noted Dr. Ruth Levy Guyer opening the second day of Haverford’s Symposium on Scientific Ethics last week.

But, she asked, are these things always for the good? Are we pushing too fast with too little thought? 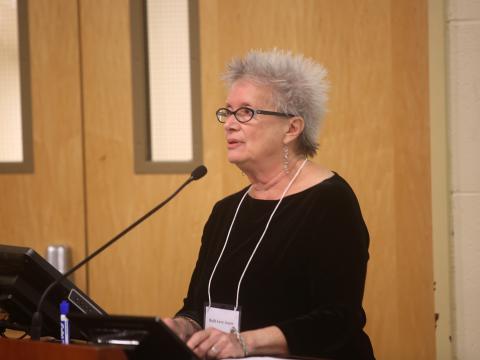 “We do these things because we can, not because they necessarily make sense, and I wonder why we’re not thinking more about the implications of these great, high-tech advances instead of simply focusing on their applications,” said Guyer, a former Haverford professor and writer whose interest include medical and environmental ethics. “Don’t we have moral obligations to ourselves, to other species, to the earth and to future generations to attend more fully to the questions? That’s what we’ll be talking about today.”

More than 150 Haverford students, alumni, and staff attended the two-day symposium, which was supported by Haverford’s Initiative in Ethical Engagement and Leadership (IEEL). Andy Pleatman ’66 established the initiative in 2014 with a gift of nearly $2 million with the goal of developing curriculum with an ethical focus. (It also funded last summer's inaugural Ethical Leadership Summer Institute.)

The Koshland Integrated Natural Science Center organized the symposium with support from the Center for Career and Professional Advising and the Center for Peace and Global Citizenship.

Haverford President Kim Benston welcomed participants on the symposium’s first day, noting the college’s Quaker heritage means that ethics have always been part of its DNA. Dr. R. Alta Charo, a professor of law and bioethics at the University of Wisconsin-Madison, closed Friday’s programming with a talk about the intersection of creating life and religion. She shared an exchange between evolutionary biologist Richard Dawkins and biotechnologist and geneticist Craig Venter, whose work has been adopted by intelligent design proponents. When Dawkins asks if Venter is ever accused of “playing God,” Venter, in part, replies, “My flippant answer is, ‘I don’t play mythical characters.’”

Charo, who has worked with the Obama administration on issues including stem cell policy and women’s reproductive health, also wondered if research could be interpreted as expression and, thus, be considered protected by the First Amendment.

The panels addressed ethical issues in “expected” scientific areas—genomic medicine, vaccination laws, and clinical trials—while also encouraging participants to expand their definitions. During the panel focused on “Innovative Approaches to Teaching Ethics,” Dr. Chris Feudtner talked about the challenge of teaching empathy. Feudtner, a pediatrician, epidemiologist, and ethicist at the Children’s Hospital of Philadelphia and the University of Pennsylvania, broke down the best ways to pass on bad news, developing a time table and course on how to give a negative diagnosis to adults and, even more challengingly, adolescents.

“The notion that one can take a concept as complex as empathy and organize to teach it to medical students who must then exercise that characteristic was new to me. Dr. Feudtner did a great job breaking down the concept,” said Elizabeth Ufford Green Professor of Biology Judy Owen, who chaired the symposium’s working group. “One of the symposium’s goals was to engage all faculty to teach ethical concerns. From the first panel to the last, I was starring things and taking notes to bring into the classroom.”

During the “Food and Water Ethics in a Changing Climate” panel, Dr. David Groenfeldt, director of New Mexico’s Water-Culture Institute and an adjunct associate professor at the University of New Mexico, also talked about looking beyond the obvious.

“When I say ethics, people roll their eyes a lot … ‘Don’t say this. Don’t say that. You should do this. You should do that.' But on the flip side, as John Lennon said, is imagining what else. What else can you do with your ethical imagination to look for water and food solutions that have a fun factor built into them?” Groenfeldt said. “That needs to be part of our ethical understanding. It’s not just what to do, but what we might try to do, imagining what could be.”

In her closing address, social justice activist Majora Carter said she was initially surprised to be asked to speak at the conference, as she didn’t think of herself as a scientist and wouldn't describe what she does as scientific.

But after careful thought before the event and careful listening during its panels, she found herself comfortably expanding upon “the ethics of being human” and bringing it to “the science of building communities where people living and working in them can express love and devotion to themselves and others easily and happily.” 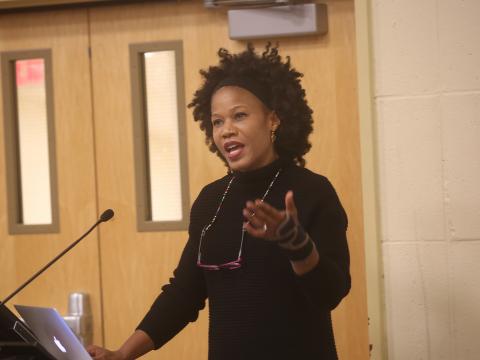 “What do you do when concepts of justice mean so many different things to so many different people?” asked Carter, a MacArthur "Genius" Grant winner whose efforts to address problems in “low-status” areas have been nationally lauded. “My work is finding a strategy to increase the quality of life in areas where there isn’t a whole lot of quality, not even going into equality, but quality.”

More on the symposium on the Haverblog.