Chair Appointments in Global Studies and the Humanities 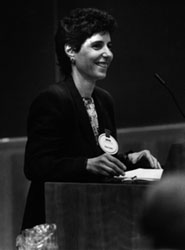 Published
Share
Anita Isaacs, associate professor of political science, and Joseph Russo, a professor and chair of the classics department, were both named to endowed professorships in the spring of 1999.

Isaacs, whose research interests include Latin America and inter-American relations, was named to the Stinnes Chair in Global Studies, a new professorship designed to internationalize further and enrich the college's curriculum.

The Stinnes Chair was created by Veronica Stinnes Petersen, a member of Haverford's board of managers, in honor of her parents, Edmund and Margiana Stinnes. Edmund Stinnes was a professor of government at Haverford College from 1942 to 1946 and taught in the Relief and Reconstruction Training program. Veronica Stinnes Petersen is currently a pediatrician with the Harvard Community Health Plan and an instructor of pediatrics at Harvard University.

Following a luncheon honoring Professor Isaacs and the Stinnes family, Isaacs gave a talk entitled, "Promoting Democracy in Latin America Today: Questioning the Assumptions." She noted that despite the fact "international democracy assistance has taken great strides during the past decade...the limitations of international contributions are impressive. In part," she said, "because the international community has operated on the basis of several mistaken assumptions."

Isaacs went on to describe some of those American "mistaken assumptions" of Latin America over the years leading up to the end of the Cold War. At that point, according to Isaacs, international influences began to shape the course of democratization. "The post-Cold War redefinition of strategic interests has had a noticeable effect on the reconceptualization of democracy assistance," added Isaacs.

A heightened appreciation of democracy in the region stems from the fact that the international community no longer interferes to impose democracy upon Latin America and, instead, offers technical assistance which allows Latin American countries to embrace democracy without relinquishing their societal needs and cultural identity. Isaacs noted that "the political transformation of Latin America, the expanded cast of players, the variety of programs and the consensual character of assistance all offer promising signs that democracy promotion is achieving its full potential."

Although the current Latin American political climate is more conducive for democracy, Isaacs recognizes that challenges for democracy still exist in the region. Although there is a strong preference for democracy, it is for a democracy in theory and not necessarily as practiced by political leadership. The potential for disillusionment with democracy remains, especially considering the fact that Latin America has not decided on a form for its democracy. The international community, while offering technical assistance, must avoid the temptation, associated with donor biases, to impose its own form upon Latin American democracy.

As the Stinnes Professor in Global Studies, Isaacs hopes to collaborate with other faculty members to create a center for global citizenship, further institutionalizing and expanding current programs by bringing distinguished speakers and scholars to the campus in a more organized and sustained manner and establishing a program of summer internships that would send Haverford students to international sites and bring international students and scholars to Haverford College.

During her 11 years at Haverford, Isaacs has utilized many international connections to bring a more global perspective to her courses.

In 1998, she received the Rowan & Littlefield Award for Innovative Teaching in Political Science for her course on Central America in which she created an "inter-American dialogue" between Haverford students and college students from Canada, Guatemala and Costa Rica. The course culminated in a two-day summit at Haverford College where the students met with policy makers from the United States and Central America to discuss the challenges of building democracy in the region.

Joseph Russo is the college's second appointment to the Audrey Dusseau Memorial Professorship in the Humanities, a chair previously held by John Speilman, professor of history, until his retirement in 1997.

The Dusseau Professorship in the Humanities was established in 1983 by John Dusseau in memory of his first wife, Audrey. Dusseau, who graduated from Haverford College in 1934 with high honors and a major in English, spent most of his professional career as a writer and then editor-in-chief and vice president with W.B. Saunders Company, Philadelphia publishers of medical books and journals. Dusseau, who died this year in January, also established a scholarship fund in memory of Mrs. Dusseau.

To honor John Dusseau and his love of English, Joseph Russo included some irony in his February 26 inaugural lecture entitled, "Language, Poetry, Philology, and 'the Stateliest Measure.'" "The stateliest measure" is a phrase, well known by lovers of English literature, coined by Alfred Lord Tennyson. Russo's lecture was a comparison between the dactylic hexameter of Homer and the iambic pentameter used by English poets. He explained why dactylic hexameter sounds so good in Latin and Greek but so terrible in English. He made the radical claim that English poets, especially Tennyson, were envious of dactylic hexameter, "the stateliest measure."

A specialist in Homer's Odyssey and early Greek lyric poetry, Joseph Russo is the only American classicist among six international scholars to provide commentary for Oxford University Press' three-volume edition of the epic poem. The line-by-line commentary for the third volume of the Oxford University edition took seven years to complete and led Russo on an extensive research journey to Italy, England, France and Holland, where he lectured on topics related to Greek epic language, style and narrative.

Russo has been the recipient of the Woodrow Wilson National Fellowship, a Fulbright Fellowship to Italy, a Junior Fellowship at the Center for Hellenic Studies in Washington, D.C. and the NEH Younger Humanist Study Fellowship. He has written two books, A Commentary on Homer's Odyssey, Vol. 3 in 1992 and Omero, Odissea, Vol. V. Libri XVII-XX in 1985. This summer, he is working on another book and updating the Oxford University commentary on the Odyssey.