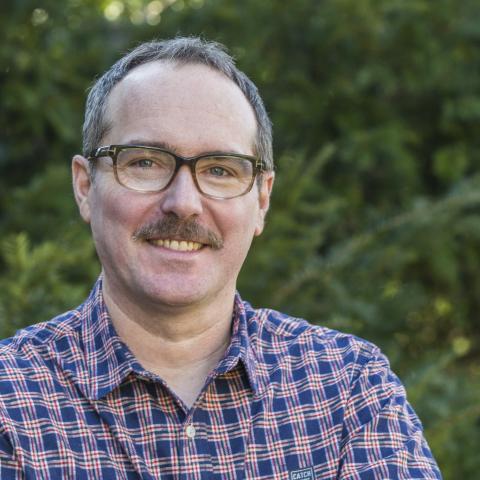 Thomas Devaney has taught at Haverford College since 2010. As of 2021, he is also affliated with the Lindy Institute for Urban Innovation at Drexel University. Devaney is a Pew Fellow in the Arts (2014) and wrote and co-directed the film Bicentennial City (2020) produced by DocuLabs.

He is the author of Getting to Philadelphia (Hanging Loose Press), You Are the Battery (Black Square Editions), and the nonfiction title Letters to Ernesto Neto (Germ Folios). Other books include, Runaway Goat Cart (Hanging Loose) and The Picture that Remains (The Print Center) with photographer Will Brown.

Devaney's work has been featured in Best American Poetry 2019, The Philadelphia Inquirer, The American Poetry Review, The Brooklyn Rail, Hyperallergic, and BOMB Magazine. His poem "The Blue Stoop," inspired the name of the literary arts org Blue Stoop: A Home for Philly Writers.

His course "Philadelphia: Inventing a City" was the first offered in the joint Tri-Co Philly Program, spring 2019.

A Poetic Tribute to Haverford's Trees, was a collaboration between Haverford's Arboretum Association and Devaney's creative writing class. It led to the "Under an Oak Tree Tour," in which workshop students read their original poems dedicated to campus trees.

In 2021, he was featured in the short films from the Healing Verse series. A spotlight on his book The Picture that Remains aired on WHYY TV-12’s Friday Arts Program. Projects include, "Talking at the Table" a pop-up story project at the Reading Terminal Market, "Tales from the 215" for "Philadelphia Freedom" show at the Institute of Contemporary Art, and poems written for "Common Ground: Eight Philadelphia Photographers in the 1960s and 1970s" at the Philadelphia Museum of Art.

Devaney was at the University of Pennsylvania for nine years: from 2001 to 2005 he was the program director of the Kelly Writers House and producer of the radioshow "LIVE" on 88.5 WXPN. He was awarded a Distinguished Teaching Award from Penn's Critical Writing Program where he taught full-time from 2006-2010.