A Poetic Tribute to Haverford's Trees 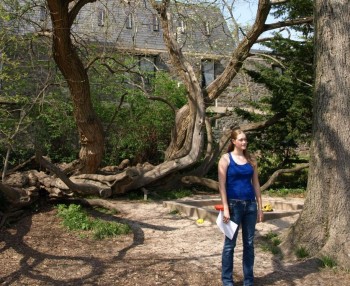 Olivia Swomley '12 reads her poem in front of Haverford's climbing tree, which inspired her writing.

Olivia Swomley '12 first encountered Haverford's climbing tree on a warm, misty night last fall. She was fascinated by its diverse, winding trunks.“It looks like several trees grafted together,” she says.“I like having a lot of different ways to look at one tree.”

The climbing tree, located by the playground behind Magill Library, served as Swomley's muse as she and her classmates in Visiting Assistant Professor Thomas Devaney's Advanced Poetry workshop spent the spring semester writing poems dedicated to individual campus trees. The students read their works in front of their chosen trees on a sunny afternoon in April as part of“Under an Oak: A Tree Tour in Poetry,” a collaboration between Devaney's workshop and Haverford's Arboretum Association.

The project spawned from a chance meeting between Devaney and Bill Astifan, director of the Arboretum. One afternoon, Astifan offered a bag-laden Devaney a lift to Woodside Cottage, and the two began discussing their respective jobs. Devaney invited Astifan to give his poetry class a one-day course in Haverford's flora and fauna. From there, the two came up with the idea of a tree tour via poetry, led by the students. Devaney got the name for the tour from the title of Walt Whitman's poem“Thoughts Under an Oak: A Dream.”

To help his students prepare for their writing assignments, Devaney asked them to read similarly-themed poems by William Carlos Williams, Marianne Moore, and Rainer Maria Rilke among others. They also kept an online tree journal on Blackboard.

Many students told Devaney that what they liked most was the sense of having a tree of one's own.“I have bonded with my tree, and in doing so gained a new perspective on nature,” says Stephanie Mattiello '13, who wrote about the Moss Sawara False-Cypress that stands beside Founders Hall. She chose her tree, she says, because of its strength, its deep, thick bark, and its aura of mystery:“It seems as if it has been told hundreds of secrets.”

Devaney proclaims the“Under an Oak” tour more than just a success; it was a“joy,” he says.“We worked all semester on drafts of the poems, but somehow when the students were reading in front of their trees, it was as if I was hearing the poems for the very first time.”

Bill Astifan enjoyed viewing the familiar trees he's known for years from so many different perspectives.“Seeing what [the students] saw, and understanding what was in their minds, truly impressed me,” he says.

The assignment inspired Olivia Swomley to take an arboretum tour of her own.“Knowing about the history and ages of the trees,” she says,“I am able to appreciate them so much more.”