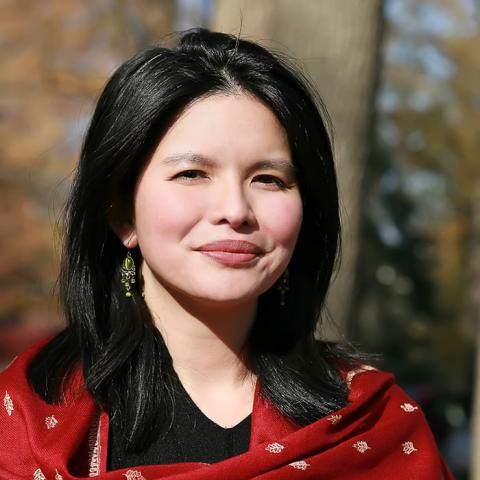 On the 56th anniversary of Dr. Martin Luther King Jr.’s voting rights march to the Dallas County Courthouse in Selma, Alabama, the retired longtime Haverford College employee describes what it was like to be there.

Sam Williams worked at Haverford College for 40 years, retiring in 2013.  But before he joined the campus community—working in housekeeping, central receiving, and purchasing—he grew up in Selma, Alabama, and, as a teenager, was a part of its civil rights meetings and marches in the mid-1960s.

To kick off the Office of Multicultural Affairs’ celebration of Black History Month, Williams spoke with Theresa Tensuan ’89, associate dean of the College and OMA director, about being a part of such an important moment in Black history.

Theresa Tensuan: Can you tell us a little bit about how you grew up?
Sam Williams: I was born in Cincinnati, Ohio, and my mother passed when I was a couple of months old, so they took me and my sister and brother to Alabama to live with my mother’s mother. My brother was  15 and my sister was 13, and then because everyone was poor then, I sort of got passed to a friend of my grandmother’s, but the backyards met so we were one big family—we managed to take care of our own. I lived in Selma, in the city, [and] was there for all the demonstrations.

TT: How did you become involved with the movement?
SW: I sort of got involved in the movement in my junior year of high school. I stopped going to school that year, was part of the movement--closer to the SNCC [Student Nonviolent Coordinating Committee] folks than to the others like SCLC [Southern Christian Leadership Conference]. I sort of went to the meetings, and got to know some of the people and trust them. They were young folks, a little older than I was, we spoke the same language and we were all pissed.  Almost all of the meetings were held in churches, and there were devotionals, singing, several people would make speeches. It was different depending on the days because people had to work, but there were a lot of people. It would go from church to church, the main church was Brown Chapel church. I was in Brown Chapel Church when John Lewis and the others decided to march to Montgomery.

In my high school, of the students in the 10th, 11th, and 12th grades, a good 80% of the people took part in the marches. Then our teachers got involved because they were pushing toward being able to vote, because they couldn’t. One day after they left [school] to go march around the Dallas County Courthouse, some of us sneaked out of the windows to follow them. I have this visual memory of seeing the sheriff beat them down the steps, and that did really mess with our heads, because we couldn’t do anything about it. We couldn’t help.

TT: What did your family think about the protests?
SW: My adopted mother was really worried about my participation in the demonstrations because she was principal of a school. She was worried that if they knew that their adoptee was involved they would fire her. She had a three-room schoolhouse in the country. The state only paid her and two other teachers’ salaries—surrounding farmers provided building and wood for the wood stove. The rest of my family was glad to see it happening, and she was too—she was worried about the students more than anything else.

TT: What motivated you to join the movement?
SW: Wanting to have freedom, not wanting to be in fear all the time, wanting to not have to bow down to white people. I couldn’t look a white woman in the face. I went three times to prison. SNCC was not just interested in going to jail. [They] wanted to educate Black kids, [and were] still supportive of SCLC, [but they] they understood that the schools were not really good. The powers to be, the Board of Education, didn’t want them to be as good as the white school. [SNCC] was sort of supported [by and] worked with SCLC and local folks, but it was really about education, more than anything that I remember, it was really about education. In fact, [SNCC] set up a library that was across the street from the city police with a Black undertaker on the first floor. They figured that with it being across the street from the police, they couldn’t let anyone come burn it down, harm anyone.

I got to travel a bit with SNCC and go to other places. I even went on a fundraising trip to Chicago, and on the way there, we went through Mississippi. There was a lady sitting there, going over her speech--she was sitting in some chairs in an empty room—and Iater, I found out that it was Mrs. Hamer, Fannie Lou Hamer. She was getting her speech together to create the Mississippi Freedom Democratic Party…. She was so serious, and she wasn’t afraid.

TT: What did you learn from that experience?
SW: It made me pay attention to what was happening in the world. In South Africa, Black folks were starting to demonstrate and ask for freedom, and I realized that there were people in the world who were worse off than me—I needed to pay attention to their struggle as well. And my uncle told me to always read the newspaper and watch the news everyday because you don’t know what those white people are doing.

TT: How did you come to work at Haverford?
SW: I started at Haverford in 1973. I was going to Bingo with my sister and friend of hers, and we ran into Harold Thomas, who was in charge of [the College’s] housekeeping at the time, and the woman said, “Give this boy a job. He’s a good steady kid.” [It was] temporary—three months—and they paid me out of petty cash. I stayed with housekeeping for two years, worked with [the] summer conference program, and I was in charge of the students who were staying for the summer and working. I worked in the Barn [storage space, where packages were delivered] that was Central Receiving, and at some point, they asked George Kutzer—and his famous dog Hans, a German shepherd who would bark when people came to the door—to do some stuff in office supplies, so I set up the storeroom, and, later on, created the billing system…. [Then I] became director of purchasing through retirement in 2013. I know that a lot of the students became my friends and still are to this day.

TT: How do you think the College changed in your 40 years working there?
SW: I think Robert Stevens [College president, 1978-1987] was really good for Haverford. He hired Black people and other non-white people... [Former Dean of the College] Freddye Hill came along, and [Professor] Charles Payne, and [Professor] Lou Outlaw and those folks, and they really did change Haverford’s view of the world. And they were not afraid, which took me back to the folks in SNCC... And I was so glad when I heard that Haverford had hired a woman to be president. And I just thought, I hope she has some nuts, and I sensed that she would bring something different to Haverford.

Theresa Tensuan
Associate Dean of the College, Dean for Diversity and Community Engagement, Director of the Office of Multicultural Affairs
ttensuan@haverford.edu
Author Archive