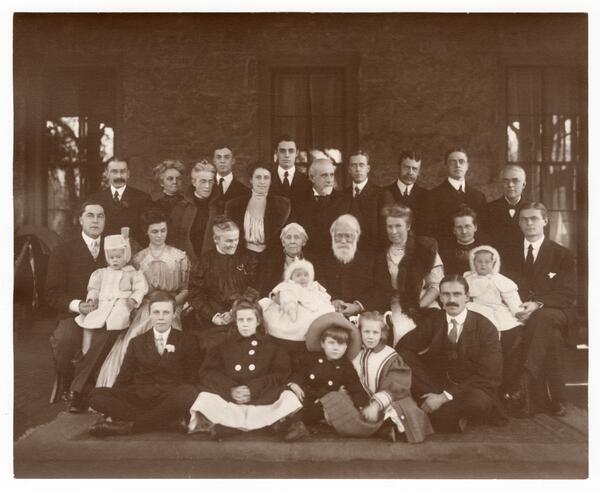 Alexa Horkava '22 examines the papers of these connected families and what they can tell us.

There is little doubt that the Cope-Evans family has been one of the most influential Quaker families in the United States. Haverford’s Quaker & Special Collections (QSC) has records of their family history from between 1683 and 2012, meaning it captures not decades, but centuries of financial documents, personal letters, business deals, photos, records of travel, diaries, and much more, thus providing a deep insight into how public and personal life has changed and evolved during that time. During my time as a student worker in QSC, which is nearing the completion of its second year, I have worked on and processed multiple files, and collections, associated with this family. Back when I started, I was unsure what the purpose of learning about old Quaker families was; however as I delved deeper into their lives, I started recognizing the importance and value of this record-keeping not only from the historical side, but also from economic, social and cultural perspectives of the eras during which the Copes and the Evanses have lived.

The family wrote many letters across the years - a fact that is hardly surprising. However what is surprising is how many of them were kept in conditions that allow researchers and archivists to piece them together into a comprehensive story that paints a picture as personal as it is historical. In their letters, the Copes and Evanses discussed their family issues as much as they discussed politics and economics in the United States and also the world. The picture these discussions paint is often vastly different from what the family presented publicly. For instance, as Quakers, their antiwar stance was not only an expectation, but a requirement. Yet, there were family members who fought in wars - some on actual battlefields, such as in World War I and II.

The Cope-Evans family members also engaged in personal rivalries. For instance, in the late 18th century, Edward Drinker Cope fought the Bone War, a series of ruthless battles against his nemesis, Othniel Charles Marsh. Instead of fighting with war machinery, the men used their paleontologic, and in the later stages also economic, prowess to affirm their supremacy in the field of paleontology. Cope and Marsh were initially on friendly terms, and even named reptile species after each other (ptyonius marshii, mosasaurus copeanus), before their ideological and class differences resulted in one of the most bitter feuds in the history of paleontology, full of bluffing and bribery; however, it also resulted in some of the biggest milestones in the field of  dinosaur research.

Many of the Cope-Evans family members, including Edward Drinker Cope, attended Westtown boarding school for their early education, and then attended Haverford for their higher education or taught at Haverford following the completion of their college education. The collection includes many letters from the Cope and Evans men sent to their families during their years at Haverford, including during the beginning years of the institution, adding a human dimension to the many records of classes, grades, curricula, financial statements, fundraising letters, faculty payslips and more that Haverford’s own institutional records contain. For example, Thomas Pim Cope, at Haverford in its earliest years, talks about student life, Haverford curriculum particularities, and examinations in his letters to his father, Henry Cope, from 1837. Francis Reeve Cope writes about beating Swarthmore in hockey and about Haverford’s attempt to ban the College’s secret societies in his letter to his mother in 1900. Through these letters, institutional changes that occured in the Tri-Co over the last two hundred years are given a timely character through the opinions of then-students. This practice of writing home is something most current Haverford students are familiar with - except nowadays, we don’t write our dads and moms letters, but WhatsApp and iMessages instead.

Another interesting segment of the collection is the one dedicated to travels and voyages of the Cope-Evans family members. Based on their records, travel, even overseas, seems to have been a fairly common thing for some of the family members, including women - a fact I did not expect to come across given the historical nature of the documents and the state of women’s rights across this history. Yet Clementine Cope traveled through France, Italy and Switzerland with her husband in the late 1870s and Ruthanna Cope spent extensive time in England, as did Elizabeth Stewardson Cope. In many ways, the story of the Cope-Evans family is the story of the modern history of the US. It is a very particular story narrated by memories of very particular people - upper-class, white, Quaker, influential, traditional - and it overlooks many challenges other types of people faced during this time, yet it improves the modern understanding of how people lived, how people thought and how people acted, or didn’t act, in certain situations. From my perspective, it humanizes history and contextualizes events that have shaped the world on the large-scale, showing how these events affected people on the individual, familial, or community level. It details the evolution of American society across more than three centuries, a century longer than the United States as we know it today even existed. It is an irreplaceable part of our pasts that we can only be grateful for having access to.

Over 5000 items from the Cope Evans Family Papers have been digitized and are available on the new TriCollege Libraries Digital Collections platform.

Sarah Horowitz
Curator of Rare Books and Manuscripts and Head of Quaker and Special Collections
shorowitz [at] haverford.edu
Author Archive