The Truth About STRANGE TRUTH

Hurford Center Emerging Artists in Residence Harlow Figa ’16 and Sarah Moses ’16 helped organize the sixth year of the film series, which kicks off on March 15 with a screening of Shirley Clarke’s 1967 film Portrait of Jason at the Bryn Mawr Film Institute.

As the old gym transforms into a state-of-the-art facility for visual culture, arts, and media and prepares for an opening later this fall, all eyes are on related activities here on campus. So it is a perfect time to unveil the John B. Hurford ‘60 Center for the Arts and Humanities-sponsored 2017 STRANGE TRUTH Film Series, now in its sixth year.

Led by Vicky Funari and John Muse, who are both visual media scholars with HCAH, the series cultivates a multi-week opportunity for community members to engage not just with ambitious film projects, but with the filmmakers themselves, who are invited to campus to interact with students and enrich the curriculum. This year the series, which will screen films both on campus and at the nearby Bryn Mawr Film Institute from March 15 through March 30, is spotlighting four films that explore portraiture, reenactment, autobiography, ethnography, and the non-fiction imagination.

An exciting new addition to this year’s STRANGE TRUTH series is the organizational collaboration of Harlow Figa ’16 and Sarah Moses ’16, HCAH emerging artists in residence who helped plan this year’s series and are also currently collaborating on a documentary film about designer and artist Harry Bertoia.

Helping to plan this year’s events means that the educational experience of STRANGE TRUTH has come full circle for Figa (who prefers they/them pronouns). During the film series inaugural year, when filmmakers Lucien Castaing-Taylor and Ilisa Barbash visited Figa’s “Advanced Documentary” class, they were able to receive unique mentoring early on in their film career. 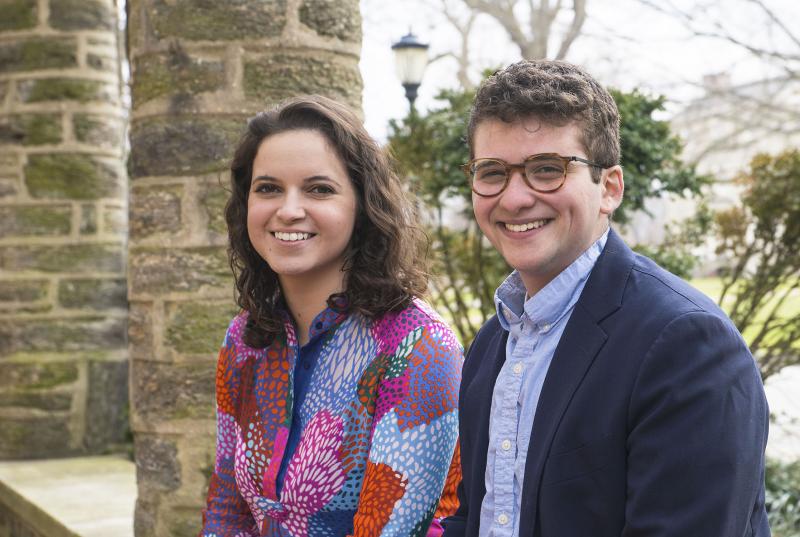 “I showed my first film to Lucien Castaing-Taylor, which was a crazy thing to do,” said Figa. “He gave feedback, and it was a very collaborative experience, which is not something you can usually get at this level of making.”

But for those interested in film and the arts in the Bi-Co, one-on-one interaction with world-renowned filmmakers isn’t all that unusual during STRANGE TRUTH.

STRANGE TRUTH was spearheaded by Funari and Muse in 2009. Their goal with the film series—and with their programming efforts as a whole at Haverford—is to strengthen the film culture on campus. With their curricula and planning, they have built the College’s capacity for filmmaking and collaboration with other organizations and events.

According to Muse, he and Funari want students, “to be able to think as ambitiously as they are able to think,” when making films. STRANGE TRUTH is a step in this direction, especially because it shows students what filmmakers do, what different niches they can occupy, and how such work can be real and palpable. The series’ outreach efforts and cross-campus collaborations also seek to form new bridges between the filmmaking community and other groups on campus, presenting film in new, engaging ways.

“I’m really excited that What Now? Remind Me [one of this year’s films] is kind of in the genre of disability film and portraits of people with disabilities, and that it’s also kind of in the genre of queer cinema,” commented Figa. “So the curricular intersections are really exciting for me. And STRANGE TRUTH, because it’s such a public event and so inviting to everyone, is a great way for people who don’t really study film to get interested in it.”

Weissinger has always tried to keep this connection-building goal in mind with HCAH programming. Last year, STRANGE TRUTH corresponded with the Cantor Fitzgerald Gallery exhibition Among the Unburied, as well as the Hurford Center faculty seminar “Attending to the Dead.” As the series’ films grappled with themes surrounding the physical body, the various HCAH-sponsored events on campus were able to create an expansive web in which film became a central interest to students and community members in classes, galleries, and more.

“It was a total planetary alignment,” said Weissinger.

As HCAH ushers in an exciting new era with the brand new Visual Culture, Arts, and Media (VCAM) building this fall, even more “planets” in the College arts scene are set to align. In addition to the continuing success of the STRANGE TRUTH series, Weissinger noted the expansion of experimental media courses, the popularity of the annual Tri-Co Film Festival (and a festival fund that supports submission of student work to other film festivals), and the success of the Emerging Artist in Residence Program and the Flaherty Fellowship, which sends two students and a faculty member to a summer film seminar at Colgate University.

“As we look towards VCAM, you can kind of connect these dots,” he said. “Finally, we’ll have all of these facilities in VCAM, which will be the home for much of this activity. This is a really exciting moment.”

Muse also noted that the dots will be “connected, but impossible to draw precisely, because there are new dots that will get to be drawn,” as new possibilities emerge.