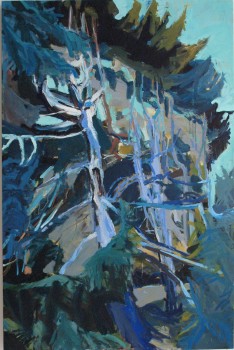 A mixed media exhibit featuring the work of visiting professors and staff members in Haverford's fine arts department will be displayed in the College's Cantor Fitzgerald Gallery, December 7 - 21, 2007. Featured artists include Tess Bilhartz, who will be showing paintings and drawings; Rebecca Robertson, photography; Owen Schuh, paintings and mixed media pieces; Marianne Weil, monotypes and sculptures; and Elizabeth Whalley, paintings. Tess Bilhartz graduated from Haverford in 2006 with a major in fine arts and a minor in comparative literature. Having concentrated in painting and drawing as a student, she continues to pursue both disciplines actively. She currently works as the fine arts department assistant at Haverford, dividing her time between the office and her studio. She works increasingly on paintings and drawings inspired by outdoor settings. Rebecca Robertson is a photographer and writer who lives in New York City. She was born and raised in Berkeley, California and received her M.F.A. from the School of Visual Arts and her undergraduate degree from Bryn Mawr College. Her work, which examines the role of nature in the built environment, has been shown at the Queens Museum of Art, and her writing appears in ARTnews magazine. Owen Schuh was born and raised in Stevens Point, Wisconsin. He graduated from Haverford in 2004 with honors in fine arts and a minor in philosophy. He received his M.F.A. from the Tyler School of Art in 2007, completing his final year of study in Rome. His work draws from his broad educational background and embodies a unique blend of mathematics, philosophy, and the observation of nature. Marianne Weil studied sculpture in both the United States and Italy for many years before embarking on her career as a sculptor. She has taken part in numerous group and solo exhibitions throughout the United States, Canada, and Europe. Among the most notable of her accomplishments are her representation and exhibitions at the Kouros Gallery in New York, her receipt of multiple grants and stipends from the New York Foundation for the Arts and the New York State Council for the Arts, and feature articles in the New York Times and most recently in Sculptural Pursuit Magazine. Weil received her M.F.A. from the School of Visual Arts in Manhattan. Watch video of Weil's work with students on The Lost Wax Initiative. A native of Quebec, Elizabeth Whalley currently lives and works in New York City. Her work includes painting, printmaking, and digital media. Often a collaborator on installation and performance pieces, Whalley has also painted numerous commissions including mural projects in New York, Florida, Washington, and elsewhere. She has taken part in several artist residencies, and has been awarded a Canada Council on the Arts travel grant and a McNair Scholars research fellowship. She received her M.F.A. from Brooklyn College, as well as an advanced certificate in performance and interactive media arts. She is currently on the part-time faculty of Adelphi University in Garden City, New York, Haverford College, and the Pratt Institute in Brooklyn, where she teaches painting. Located in Whitehead Campus Center, the Cantor Fitzgerald Gallery is open Monday-Friday 11 a.m.-5 p.m., Saturday and Sunday noon-5 p.m., and Wednesdays until 8 p.m. For more information, contact Matthew Seamus Callinan, Campus Exhibitions Coordinator, at (610) 896-1297 or mcallina [at] haverford.edu.