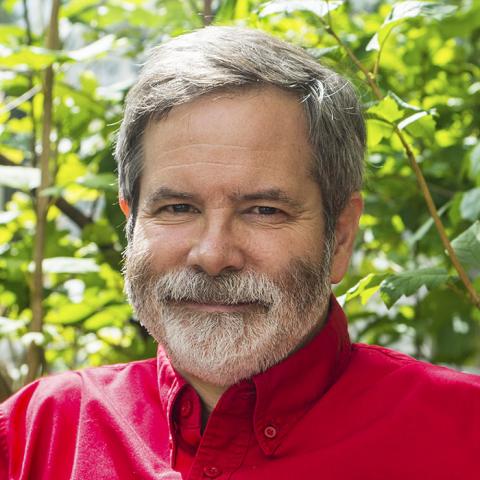 Nanoscale and molecular electronics As the electronics industry continues the trend in miniaturization, it is fast approaching a serious technological barrier. Production linewidths for the highest-performance integrated circuits have already reached about 600 atoms, while the practical limit for conventional transistor operation appears to be a linewidth of about 200 atoms. Circuits that are self-assembled from functional molecular components may offer a way of circumventing this limit, lowering production costs, and increasing functionality by interfacing with biological and chemical systems. Our research centers on the photoelectronic properties of nanostructures that include porphyrin molecules. Although there is a chemical aspect to this research, background in college-level chemistry is not required. Porphyrins are common in natural systems: the photoactive part of chlorophyll is a porphyrin, as is hemoglobin. We are pursuing two main lines of research, one on systems that combine engineered peptides (short protein units) with porphyrins, and the other on self-assembled nanorods, nanotubes, and nanotapes made completely from porphyrins. The work on peptide-porphyrin systems is done in collaboration with Karin Akerfeldt in the chemistry department and Rob Fairman in biology. By cleverly selecting the amino acid sequence, they have created several types of "building blocks" that self assemble into nanofibers. This summer, we will begin characterizing the electrical properties of these nanofibers, and their response to light. By using peptides as a backbone, we gain a high degree of control over the resulting structure, and this may allow us to design improved sensors, components for photon-based computing, or perhaps solar cells. The project involving nanostructures made completely from porphyrins is based on a wonderful discovery we made here just a few years ago. Under acidic conditions, the porphyrin TPPS4 (shown to the left below) self-assembles into beautifully-straight nanorods with uniform cross-section, as shown to the right below. These nanorods exhibit a remarkable array of photoelectronic behaviors, as shown in the figure below. The green bars show the time periods when we apply 0.5 V across the sample, while the red bars show the time period when we illuminate it with a 488 nm laser. When light is applied, there is a rapid turn-on of current, followed by a slow growth over minutes (i). If light is turned off, the current falls to zero immediately, but when light is applied again, the sample “remembers” the slow growth period, so that the current returns to an enhanced level (ii). With light applied but no voltage (iii), we observe a photocurrent, demonstrating the generation of electrical power. The direction of this zero-bias photocurrent is trainable, and depends on the polarity of the previously-applied bias voltage. These behaviors are quite unusual; it is especially challenging to explain why something so small shows electrical changes on such long time scales. To investigate further, we are continuing to probe this system, as well as nanorods and nanotubes made from related porphyrins. By comparing the behaviors of these systems, we expect to gain understanding of the electrical conduction mechanisms, and also of possible applications. Students working on either project will learn how to use the Atomic Force Microscope (used to acquire the image shown here), and to make low-noise electrical measurements. They will also learn basic optical techniques used for our laser-based measurements. They will interface with our collaborators at Haverford, at the University of Pennsylvania, and at Sandia National Labs. (Virtually all the work will be done at Haverford, though there may be one or two short trips to U. Penn. to use the electron microscopes there and/or to talk with collaborators.)