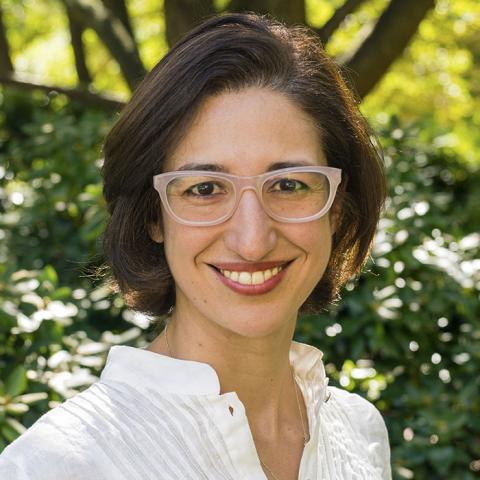 Paulina Ochoa Espejo is an Associate Professor of Political Science. She works at the intersection of democratic theory and the history of political thought, and she is interested in questions about popular sovereignty and borders. She has written about populism, the boundaries of the demos, immigration and the right to exclude, the relation between democracy and territorial rights, the moral relevance of borders and border control. She is also interested in Latin American Political Thought.

Before joining the faculty at Haverford College, she was an Assistant Professor at Yale University, and a Laurance S. Rockefeller Visiting Fellow at the University Center for Human Values, Princeton University. She has been visiting professor at CIDE in Mexico City, and a Carey Postdoctoral Fellow at the Erasmus Institute in the University of Notre Dame. She was a member of the School of Social Science at the Institute for Advanced Study, Princeton, and a recipient of the ACLS Frederick Burkhardt Fellowship for Recently Tenured Scholars.

My book On Borders: Territories, Legitimacy and the Rights of Place ( Oxford University Press,  2020) asks when the borders of states can be justified. Today most people think of borders through the lens of identities: they see state borders as the limits of identity groups: as boundaries dividing “us” from “them.” On this view, each person belongs to an identity group, like a nation or a people, and each such group should own its own unified and clearly delimited territory, just like the castaway has a clearly delimited territory in his desert island, which he can claim to own. But peoples, the book argues, are never neatly contained within a territory--hence this identitarian view of view of borders and territories often leads to xenophobia and identitarian violence. Just Borders challenges both this identity approach to territorial politics and its Desert Island model of borders. As an alternative, it presents and defends a place-based approach to territorial politics, and a Watershed model of borders. On this approach, a people or a nation does not own a territory; rather, a territory emerges from local socio-natural relations and institutions, in which people respect and perform on their place-specific duties, like shoveling the snow off their bit of the sidewalk. Using place-specific duties as a basis, the book models the borders of states as watersheds instead of as shores. A watershed is a ridge that marks the drainage trajectory in a water basin. On Borders proposes that we see borders as analogous to watersheds, and territories as analogous to water basins, in that borders determine relations and connect jurisdictions, rather than marking the edges of a territory. Instead of the native/alien divide pushed by the Desert Island model, in the Watershed model the distinction between the inside and the outside comes from differences in the type of relations and institutions that obtain on each side of the border line. In the Watershed model, it is not identity and property alone that determine political bonds: presence and participation in systems involving geology and biota also determine those bonds. The book then applies this place-based approach to questions about how to deal with immigration, transnational resources, and border walls.

I am a 2019 recepient of an ACLS Frederick Burkhardt Fellowship for Recently Tenured Scholars, and I will take the Fellowship in 2020-21. I will be in residence at the Andrea Mitchell Center for the Study of Democracy at UPenn working on a new project entitled Rights of Place: Territory, Property, and Jurisdiction in the Americas.

My new project deals with the question of who should have territorial rights. Most people nowadays think that only States have legitimate territory. But recently some scholars have argued that territorial rights belong to Peoples, or Individuals. In this project, I turn to the history of Derecho Indiano (Spanish Colonial Law) to find an alternative. In the history of Latin America I find historical examples to argue that territorial rights do not belong to individuals, pre-political peoples, or legitimate states; instead it is grounded communities—pueblos—that do and should have these entitlements.

On Borders: Territories, Legitimacy and the Rights of Place, Oxford University Press, 2020.