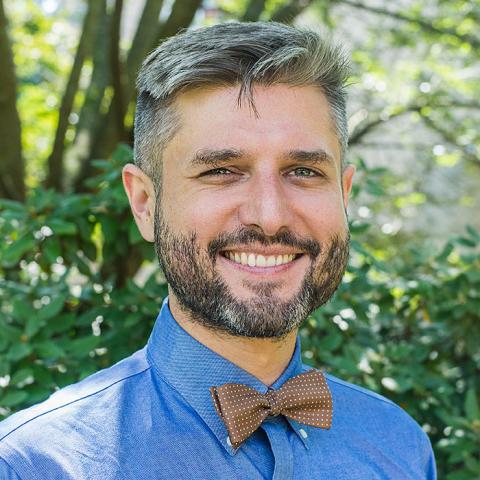 I first fell in love with Classics in a course on Greek and Roman Comedy I took my freshman year of college; I’d signed up for it purely to satisfy a distribution requirement on my way to a pre-med major in neuroscience. I was astonished to discover that the comedies of Aristophanes seemed to speak directly to me over the gulf of centuries: they were witty, vulgar, obscene, offensive, humane, satirical, blasphemous, sophisticated; they seemed to contain the whole range of everything ugly and beautiful about human life — and they were funny. By the time a cheese grater was adduced as the star witness in the trial of a dog for cheese-theft in Aristophanes’ Wasps, neuroscience was forgotten. I dove into Greek, and then Latin, spent a year in Athens absorbing the riotous life of that most ancient and most modern city, and finally went on to do graduate work at Bryn Mawr and Penn so that I could share my love of ancient literature with the rest of the world through teaching and writing about Greece and Rome.

If you'd like to learn a little bit more about me, my teaching, and my research here at Haverford, check out this article about my course on Sex and Power in the Ancient World, or this interview about items in my faculty office!

I’ve never escaped the lure of Greek comedy; my current research explores the relationships between comedy and other genres of Greek literature. In all of my work on comedy, I’ve tried to look beyond the surviving plays of Aristophanes by bringing in the fragmentary remains of plays by the many other comic poets of classical Athens. My interest in fragments sparked two of my current research projects: a commentary on the fragments of the poet Theopompus, which I’m currently composing for the series Fragmenta Comica; and a digital humanities platform for collaborative translations of the ancient Greek scholarly texts that preserve such fragments (check out Harpokration On Line and Photios On Line for a glimpse of the first fruits of this project).