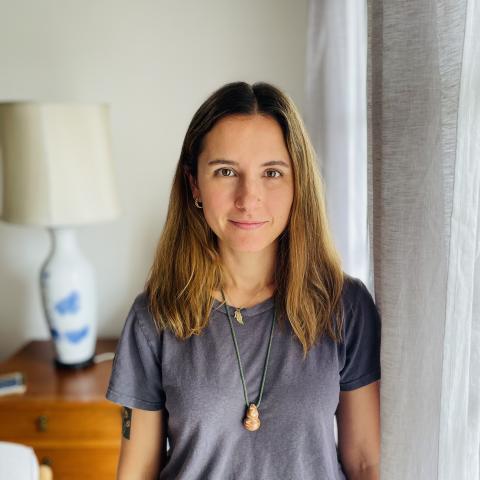 Lindsay Reckson is a scholar of post-Reconstruction literature and culture, working at the intersection of American and African-American literary studies, performance studies, media studies, and religion. Before coming to Haverford, Reckson was a Presidential Excellence Postdoctoral Fellow in English at the University of Texas at Austin. She received her Ph.D. in English from Princeton University in 2011, and her B.A. in English and Creative Writing from New York University in 2004.

Reckson is the author of Realist Ecstasy: Religion, Race, and Performance in American Literature (NYU Press 2020), and the editor of American Literature in Transition: 1876-1910 (Cambridge University Press, 2022). A study of the affective life of Jim Crow secularism, Realist Ecstasy demonstrates how the realist imagining of possessed bodies helped construct and naturalize racial difference while excavating the complex, shifting, and dynamic possibilities embedded in ecstatic performance. Her current book project, Notes on Gesture, is a series of essays exploring how minimal or routine gestures become sites of ethical inquiry in times of attenuated political possibility. Her essays have appeared in American Literature, Arizona Quarterly, American Religious Liberalism (ed. Schmidt and Promey), the Los Angeles Review of Books, Avidly, Material and Visual Cultures of Religion, The Pocket Instructor: Literature, and Keywords for American Cultural Studies. She received a 2016-2017 ACLS Fellowship for Realist Ecstasy, and was the winner of the 2020 Lindback Award for Distinguished Teaching.