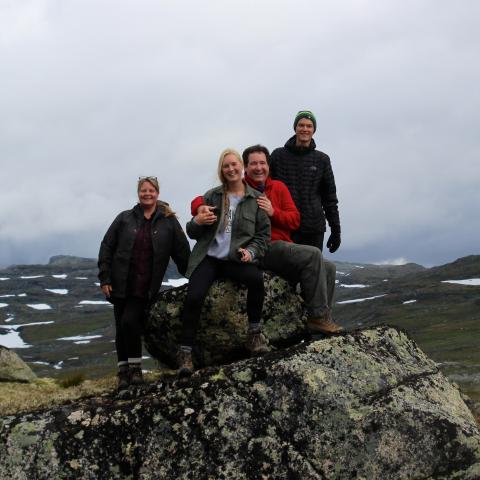 I was born in Stockholm, Sweden. My undergraduate studies in chemistry, at the University of Stockholm, had a profound influence on my later decision to pursue an academic career at an undergraduate institution. Particularly, my research experiences gained with Dr. Per Garegg (carbohydrate synthesis) and Dr. Bengt Mannervik (studies on the enzyme glutathion S-transferase) made it clear to me how important undergraduate research is in providing an exciting and fulfilling chemistry education. After I completed my B. Sc. degree, I went to the United States as a Fulbright Scholar to work on porphyrin synthesis with Dr. Kevin Smith at the University of California, Davis. I then returned to Stockholm to continue my studies, now on ribonucleotide chemistry with Dr. Per Garegg. A couple of years later my interests at the interface between biochemistry and synthetic organic chemistry brought me back to the US to pursue a project in bioorganic chemistry with Dr. Paul Bartlett's group at the University of California, Berkeley on the design and synthesis of multisubstrate and transition state analog inhibitors. After the completion of my Ph. D., I did postdoctoral work in the area of protein design (ion channels) in Dr. Bill DeGrado's lab at DuPont, Delaware. Since then, I worked as Assistant Professor in Chemistry at Rutgers, the State University of New Jersey, Camden campus, for five years before I moved, in May of 1998, to the Chemistry Department at Haverford College, Pennsylvania.

Other interests: the outdoors, traveling, globalization, diversity and gay rights.

Using the background and tools of a synthetic organic chemist, I am interested in understanding how the intricate and beautiful structures of proteins relate to their function. Students in my group work on naturally occurring proteins as well as designed sequences for biomaterials applications, related to biomedicine, light (energy) harvesting and ion sensing. A couple of projects involve a considerable amount of synthetic organic chemistry (making templates for the attachment of ion channel pore-lining sequences or synthesizing porphyrin and phtalocyanine chromophores which then are attached to helical or sheet forming peptide scaffolds). All projects involve automatic peptide synthesis and HPLC purifications, as well as biophysical characterizations, including UV-vis, CD and fluorescence spectroscopy. Projects in my group currently include: (1) Ca2+-binding proteins of the EF-hand type, (2) hydrogel forming sequences derived from semenogelin I, (3) chromophore-modified peptides for light-harvesting applications, (4) peptide models of ion channel proteins, and (5) antagonists of human chorionic gonadotropin.

The projects on Ca2+-binding proteins and peptide hydrogels are in collaboration with biophysicist and molecular biologist Professor Sara Linse at Lund University, Sweden. We frequently send students back and forth between our labs. During the last few summers, I have brought between 2-4 students to work in her lab during part of the summer in order to use instrumentation not available to us at Haverford. Currently, we are working on calmodulin, a small and essential protein found in eukaryotic cells that binds to a large number of target proteins in a Ca2+-dependent manner, thereby regulating a large number of Ca2+-dependent processes in the cell. Recently, with Professor Dolores Cahill’s group at the University College Dublin, Ireland, more than 70 new calmodulin binding proteins were identified from human brain. This is a new exciting pool of proteins to investigate that may help shed light on how the small protein calmodulin is able to regulate such a vast number of Ca2+-regulated processes in the cell. We synthesize putative calmodulin binding sites derived from several of these proteins and study their binding to calmodulin by employing isothermal calorimetry and other techniques. We are also attempting to crystallize calmodulin-peptide complexes for X-ray crystallography studies so that we can learn more about the specific protein-protein interactions on a molecular level.

Investigations of calbindin D28k provides another example of how we work with the Linse group by employing a combination of synthesis and biophysical methods to learn about the function of a protein. Calbindin D28k, is a protein that protects nerve cells from programmed cell death, following conditions of Ca2+ overload. At the time, when we started these studies, it was not known how many of the six putative Ca2+-binding sequences (termed EF-hands) actually bind Ca2+. By synthesizing the six 30-residue EF-hands present in this protein, we were able to study them individually and in various combinations to investigate how they affect each other in Ca2+binding. We were then able to demonstrate that four out of the six sites bind Ca2+ with high affinity. We also showed that the six EF-hands all interact with each other and are part of a single globular domain.  The at the time novel hexa-EF-hand domain organization has since been verified by NMR spectroscopy by another research group.

We have found that a short peptide sequence derived from Semenogelin I, the main protein in semen, forms a hydrogel. Because it is a peptide derived from a natural source and forms a hydrogel under physiologically relevant conditions, we are interested in its potential use for biomedical applications, such as wound care. We are currently exploring the effects of parameters such as pH, salts, temperature, etc, on the mechanism and properties of hydrogel formation of the original as well as closely related peptide sequences.

The aim of another project is to attach porphyrin (or phtalocyanine) chromophores to a peptide scaffold for the construction of “nanowires” capable of efficient energy transfer. The structures are inspired from the naturally occurring light harvesting antenna complexes found in plants and photosynthetic bacteria. In our system, a short peptide sequence provides a scaffold onto which porphyrins (or phtalocyanines) are covalently attached. The goal is to position them along the scaffold in a manner optimal for light-induced energy transfer. This project is an interdepartmental collaboration with Walter Smith in Physics and Robert Fairman in Biology.

We also make simple peptide sequences designed to model the action of specific membrane-associated, voltage-gated ion channel proteins. One of the targets, alamethicin, is a naturally occurring channel-forming peptide, which has been studied extensively by others as a model for ion conduction. This 20-residue peptide self-associates in a lipid bilayer to form conducting pores (helix bundles), in the presence of an applied field. The main problem, however, is that it forms pores of various size, containing different numbers of monomers, resulting in complicated conductance traces. In order to freeze out one pore size so that we can study the channel properties of a single pore size at the time, we attach a set number of alamethicin monomers covalently to a cyclic template. The cyclic templates include porphyrins, cyclodextrins and aza crown ethers, designed to template helix bundles ranging from four (porphyrin and aza crown ethers) to seven helices (cyclodextrin and aza crown ethers).

A fifth project is in collaboration with Professor Patrick McIlroy, in the Department of Biology at Rutgers University, Camden. In this project we design and synthesize simple peptides as antagonists of human chorionic gonadotropin, which is a hormone produced in large quantities particularly during the early stages of pregnancy. The main incentive for this work is to learn more about the interactions between the hormone and its receptor.