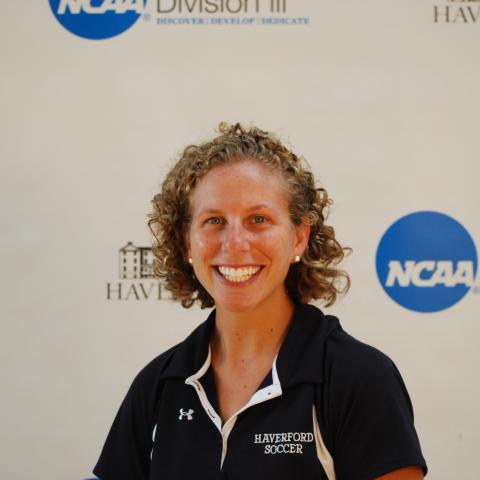 Jamie Schneck will enter her 14th season as the women's soccer coach at Haverford College in 2020. Schneck is just the fourth coach in the program’s 35 seasons. The Fords are coming off of an NCAA Tournament appearance and have made the postseason in 11 of her 13 seasons overall. In addition to receiving at at-large bid to the NCAA Tournament in 2019, Schneck first led Haverford to the NCAA Tournament by winning the Centennial Conference Championship in 2012. She followed that up with an at-large bid in 2013 for the program’s first-ever back-to-back appearances on the national stage.

Under Schneck’s leadership, the Fords have qualified for the Centennial Conference Tournament 11 times. That postseason success includes appearances during each of the last four seasons. To date, Schenck has compiled a 134-68-36 record. That .633 winning percentage ranks as the best in program history. She recorded her 100th career victory during the 2016 season with a 2-1 overtime win against DeSales on Walton Field. The Fords have won 10 or matches eight times over the past 11 seasons.

In 2019, the Fords rewrote the record for most consecutive shutouts (7) and victories (8) in school history on their way to a 13-match unbeaten streak as they finished the season with a 12-5-2 record. Defense has always been a staple of Schneck’s teams as they have posted a combined 117 shutouts over her 13, including 2 seasons, including 10 or more in seven different years.

Prior to joining Haverford, Schneck served as an assistant coach at Washington & Lee University. In 2006, Schneck helped lead the Generals to an NCAA Elite Eight appearance, a 19-1-3 overall record, and a season-ending ranking of 10th in Division III.

A 2003 graduate of Muhlenberg College, Schneck was a four-year letterwinner for the Mules playing on the 2000 and 2001 Centennial Conference Championship teams. Schneck went on to receive her master of science in sport management from East Stroudsburg University where she also served as the women's soccer graduate assistant. After receiving her master's degree, Schneck spent two seasons at Washington College as the assistant soccer coach and administrative assistant to the athletic department.