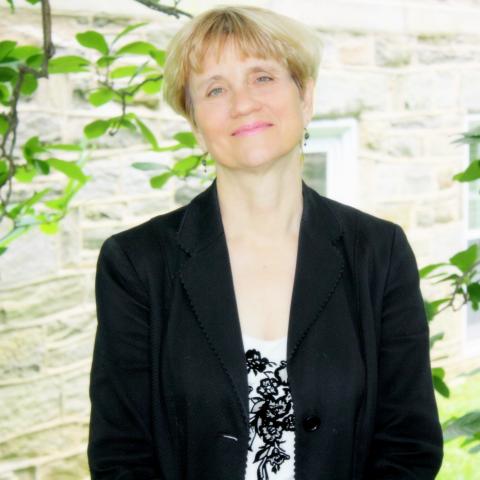 Composer, cellist, and conductor, Heidi Jacob is Professor of Music at Haverford College. Born in Orinda, California, Heidi Jacob has studied at both the Curtis Institute of Music and The Juilliard School. Her conducting teachers have included Harold Farberman, Daniel Lewis and Robert Page. Appointed Music Director of The Haverford-Bryn Mawr College Orchestra in 1996, she was Music Director of The De Paul Chamber Orchestra from 1994 to 1998. In addition to serving as music director of several university orchestras, Ms. Jacob has also been guest conductor of the Lansdowne Symphony. She was selected in 1993 as a conductor in performance as part of the American Conductors Composers Seminar at Hartt College of Music. As a cellist, Ms. Jacob has distinguished herself both as a soloist and in chamber music. At the age of 17 she won critical acclaim for her performances of Bloch's "Schelomo," with performances in California and Germany, where it was broadcast over German television. A guest artist at the 1981 Chopin festival in Miami, Florida, she has also appeared as soloist at the San Francisco Bach Festival, the Temple University Summer Festival, and on WQXR in New York City. In 1986, she toured Spain, performing cello-piano duos with her husband, pianist Charles Abramovic. As a member of the Janus Trio, Ms. Jacob has performed throughout the United States including the Phillips Collection in Washington, D.C., Bedford Springs Festival, "Mozart on the Square" in Philadelphia, and on National Public Radio. The group has toured both Spain and the former Yugoslavia, where they performed at the Dubrovnik festival. Ms. Jacob has recorded for CRS records, with a C.D. of trios by Ernest Pelligrini and Michael Zak with former Philadelphia Orchestra harpist Marilyn Costello. She was featured on WRTI's "Notes from Philadelphia," conducting performances of the Chamber Orchestra of Bryn Mawr in works by Haverford Professor Curt Cacioppo and Ferruccio Busoni. In a recording for Capstone Records she conducts the Ensemble Solarium in Curt Cacioppo’s Concerto for Oboe and String Chamber Orchestra with Harpsichord, featuring Philadelphia Orchestra oboist Jonathan Blumenfeld. She has recorded solo cello and chamber music works by Larry Nelson for Albany Records, as well as the Cello and Piano Sonatas by John Davison with pianist Charles Abramovic. She has performed as cellist with Orchestra 2001, Penn Contemporary Players, the Davidsbund Chamber Players, and has performed as principal cellist for Opera North, The Choral Arts Society and Orchestra 2001.

In a recording for Capstone Records she conducts the Ensemble Solarium in Curt Cacioppo’s Concerto for Oboe and String Chamber Orchestra with Harpsichord, featuring Philadelphia Orchestra oboist Jonathan Blumenfeld. She has recorded solo cello and chamber music works by Larry Nelson for Albany Records, as well the cello sonatas by John Davison with pianist Charles Abramovic. In 1999 Ms. Jacob was featured on WRTI’s “Notes from Philadelphia,” highlighting performances of her CD of the Chamber Orchestra of Bryn Mawr in works by Curt Cacioppo and Ferruccio Busoni. Curt Cacioppo's orchestral piece "Invocation and Dance of the Mountain Gods," from the album LAWS OF THE PIPE and conducted by Ms. Jacob, was recently selected by Parma Recordings for inclusion on the label’s online digital release FINE MUSIC, Vol. 4. In June, 2011, Ms. Jacob completed her D.M.A. in composition from Temple University, where she studied with Maurice Wright, Richard Brodhead and Matthew Greenbaum.  She wrote for her doctoral thesis a Mass for a Time of War, A Requiem Mass Honoring the Victims of the Iraqi Conflict for Soprano, Tenor Solo, two narrators, chorus and orchestra.

Ms. Jacob’s solo and chamber music works have been performed at the Kimmel Center as part of Network for New Music’s Poetry Project, Tania León's 2014 Composers Now Festival, Summer Stars Classics series in Ocean Grove New Jersey, the Philadelphia Chamber Music Society, Rutgers University’s Complex Weave: Women and Identity in Contemporary Art installation, Amphibian; New Music and Video HIArt Gallery, New York City and by The Argento Ensemble, the Opus One: Berks Chamber Choir and the Hildegard Chamber Players. Her works have been performed by violinists Miranda Cuckson and Barbara Govatos, cellists Jeffrey Solow, Michal Schmidt and cellist Thalia Moore of Earplay, flutists Mimi Stillman, Adeline Tomasone, Jeffrey Khaner, pianist Charles Abramovic, bassoonist Pascal Gallois and by Temple University’s Contemporary Music Ensemble. Ms Her String Quartet, “…on enameled tablets,” was premiered at The Stone in New York City by the Momenta String Quartet. As a winner of Network for New Music’s Poetry Project her song Rosetta Stone for Soprano, Cello and Piano was premiered at the Kimmel Center in Philadelphia in January of 2008. She was also a winner of the American Composers Forum, Philadelphia Chapter’s Pascal Gallois bassoon composition competition and won an Honorable Mention in the International Alliance for Women in Music Competition (Judith Lang Zaimont Prize division) for her work for piano; Regard a Schubert: a Fantasy Impromptu. Her cycle of songs on the poetry of Julia Alvarez, Beginning Again, was recently commissioned by L’Ensemble and has been performed in Italy, Bryn Mawr College and Roosevelt Island, New York. Her Fantasy for Chamber Orchestra was performed in Philadelphia by the Argento Ensemble as part of the American Composer’s Forum, New Voices project.  The CD of her song cycle Beginning Again, for soprano, violin and piano (2009), was recently released by the Vermont based L’Ensemble in their CD, “Poetry into Song”.

The CD of her compositions, “Beneath Winter Light,” produced by Parma Records, was released in January, 2015. Her composition, “untouched by morning and untouched by night,” for bass clarinet, trumpet, trombone, baritone, and piano is included on a CD by PARMA records, Intersections, recorded in Cuba with Cuban musicians. Ms. Jacob’s Winter Light for violin and string orchestra was performed by I Solisti Veneti, conducted by Claudio Scimone in 2016 in Padua, Italy and her string orchestra piece, Many in One was commissioned by First Editions Chamber Orchestra and premiered in spring of 2016. Her Scherzo for Flute and Marimba, was premiered in the Fall of 2018 by Amélie Debecq and Damien Delvaux at Festival Osmose in Evere, Belgium, her Suite for Flute and Piano premiered at PennState in 2019 by Mimi Stillman and Charles Abramovic and the premiere of her Endless War for Harpsichord and Narrator, by Joyce Lindorff, Harpsichord at Temple University’s Keyboard Festival. Her work for solo piano, ‘…but time will tell..” was performed at The Keyboard in the 21st Century an International Conference in Hong Kong by Linda Yim in the spring of 2019.Recent performances last spring 2020, of her compositions include her Resonance of Emerald for Woodwind Quintet, premiered by the Revolution Winds and Lilacs for SATB choir, Soprano solo and Narrator, by the Opus One Berks Chamber Choir. Performances from this past season include, Many in One, performed by the Moravian Philharmonic, August 2020 and Winter Light for Violin and Piano, performed by Network for New Music, on a recent livestream, April 2021.

The music Ms. Jacob co-wrote with Charles Abramovic for the documentary film My Sister Hali, was honored with a bronze award by the Latitude Film Awards at the UK International Festival and Docs without Borders awarded the film an “Exceptional Merit Award” for the “poetic music by Charles Abramovic, Heidi Jacob and Jeffrey Solow.”

“Heidi Jacob is an American composer with … close[r] stylistic links to European tradition…Her forth right expressiveness exposes a multitude of stylistic associations… The disc’s  most bracing item is Salome Revisited..”

“Heidi Jacobs' Two Inventions, in fact, was somewhere in the next hemisphere, drawing from a tone row in Arnold Schoenberg's largely atonal Serenade in a work that had its own modernist personality. Some of the writing suggested variations on Debussy ….What a musical adventurer.”

“Heidi Jacob is a composer whose music very much bears hearing. She is a true artist. I hope to hear more of her work. Very recommended.”

“Jacob, a professor at Haverford, managed to work in a sense of three short movements amid solo-instrument soliloquies in her excellent Many in One.”

Suite for Flute and Piano

Rainbows in the Air

Metamorphosis I for cello and piano