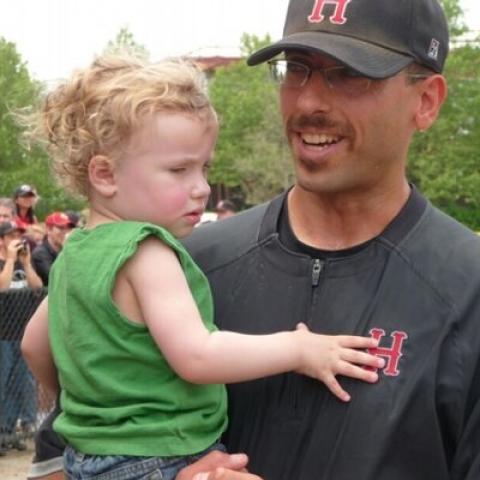 Dave Beccaria, who is entering his 20th season as head coach during the 2020 season, has led the Haverford College baseball program to unprecedented heights. Beccaria guided the Fords to Centennial Conference Championships in the 2012, 2014, and 2016 seasons. In each of those seasons, Haverford has gone on to win a game at the NCAA Division III Mid-Atlantic Regional.

Beccaria has established a tradition of winning during his tenure, compiling an overall record of 408-306-4. Those 408 victories rank as the most by a single manager in program history. His squad has made 13 appearances in the Centennial Conference Tournament during his last 15 years as head coach. Including his three Centennial Conference Championships, the Fords have played for the conference title eight times during his tenure. Six of those conference championship appearances have come in the past 10 seasons as Haverford has been nationally ranked as one of the top Division III baseball programs.

Two players, Tommy Bergjans ’15 and Charlie Carluccio ’11, have earned All-America accolades under Beccaria’s guidance. Bergjans became the first NCAA D-III player picked in the 2015 Major League Baseball Amateur Draft when he was selected in the eighth round by the Los Angeles Dodgers. Stephen Ridings ’17 became Beccaria’s most recent draft pick when Ridings was selected in the eighth round of the 2016 draft.

Also under Beccaria’s watch, Dean Laganosky ’09 was drafted by the Cleveland Indians, while non-drafted free agent Jake Chaplin ’12 signed a contract in the summer of 2012 to join the L.A. Dodgers’ Rookie Arizona League affiliate. Five of Beccaria’s players have signed international professional contracts.

Beccaria is a 1996 graduate of Johns Hopkins University, where he was a third baseman and captain for the Blue Jays. In 1997, he served as Hopkins’ junior varsity head coach and varsity assistant coach while earning his master’s degree in liberal arts. Beccaria joined Haverford’s coaching staff as hitting instructor and recruiting coordinator in 1998 and was promoted to head baseball coach in July 2000.

In the summer of 1994, Beccaria was head coach of the Aarau Hawks of the Swiss National League. He also has served as director of baseball operations and hitting instructor at SportsChallenge, a two-week sports/leadership camp designed for aspiring collegiate student-athletes.

A member of the American Baseball Coaches Association (ABCA) and the ABCA coordinator for the Mid-Atlantic Region rankings, Beccaria lives in Springfield, Pa. with his wife, Susie, and daughters Avery and Ellie.