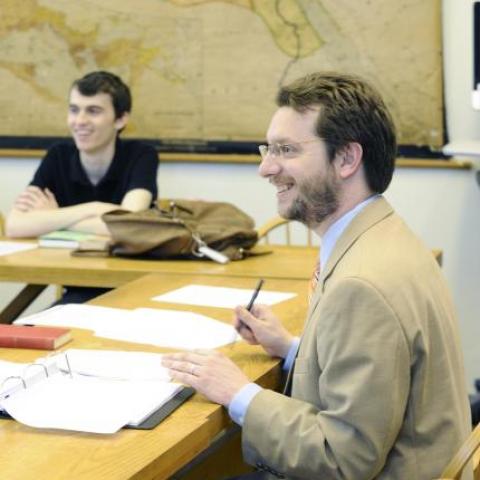 You could say that I am a bit of an "accidental Classicist." I was always a voracious reader. I hoped to be a teacher ever since my seventh-grade social studies teacher let me teach an occasional class. But it was only when I took a college course on Latin literature in translation, that I discovered Latin and Greek and was bewitched by Classical literature and culture. Classics has been called the first interdisciplinary major, and it is exactly this range and diversity of inquiry that I find so appealing. Now I spend my days discussing great works of art, thorny questions of the human condition, and fascinating moments of our shared history—not to mention helping students learn the languages that will allow them to fully appreciate both the art and cultures of antiquity. Bonam Vitam!

My scholarship focuses on the twilight of classical culture, the period now known as "Late Antiquity." One of the first things I learned about Rome was that it "fell" and it is this period—when massive political, ethnic, and religious change transformed Roman society that continues to draw my curiosity. In particular, I'm interested in the adaptive strategies taken by authors when they must contend with a frightening accumulation of tradition, a cultural moment that has many similarities with our own age. The engagement of late antique authors with their artistic predecessors allows me to dabble in the full range of Classical antiquity. And since this period was also when much of Classical culture was packaged for transmission through the medieval period to us, it also serves as an ideal jumping-off-point for my interest in the Classical Tradition and the continuing influence of Classical culture.