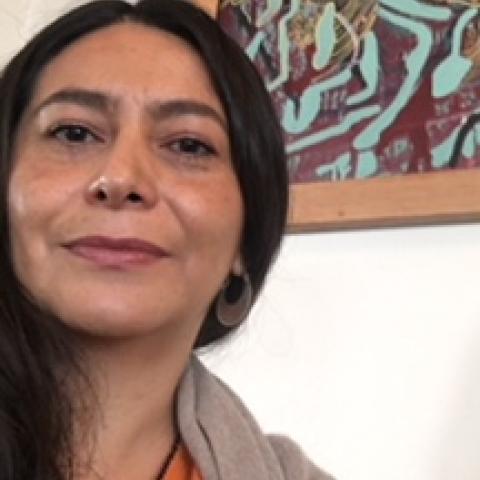 I received my Ph.D. and M.A. at the University of Pittsburgh, and Licenciatura in Hispanic Languages and Literatures at the Universidad Nacional Autónoma de México. My research focuses on cultural and literary productions related to social movements, in particular, the Student Movement of 1968 and the 1970's Guerrilla Warfare in Mexico; as well as Memory and State violence in Latin America. My current work addresses ongoing debates in Mexico about memory and state violence, as well as it analyzes literary and testimonial texts written by former guerrilla fighters during the last four decades. Working with understudied texts has provided me with a comprehensive approach to the dynamics of the social construction of memory, including official, underground, and individual memory; as well as the impact that has had socio-political turmoil, and state violence on the past's account. Research interests: Historical Novel, Testimonio, Prison Narratives, Documentary Films, Enforced Disappearance, Transitional Justice, Human Rights, Literary Criticism.

New projects on my research focus on enforced disappearance and impunity in Mexico, as well as the participation of the women in the armed struggle in Latin America.

My teaching approach aims to develop student's skill for reading, analyzing, and writing in Spanish, as well as becoming familiar and enthusiastic about academic research. Social justice and human rights are other components of my courses at all levels, encouraging students to get involved either in academic projects or by applying to the internships CPGC offers.

This course is intended for students that possess an intermediate background of the Spanish language. The main goals of the course are to expand vocabulary and conversational skills, strengthen grammar, and learn about some social, cultural, and historical issues of the Spanish‑speaking world. Vocabulary and grammar are taught within the context of the specific themes chosen to enhance students’ familiarity with Hispanic societies and cultures. Prerequisite: 100 or placement test.

This course focuses on the construction of the nation after the Mexican Revolution and its relevance as the foundation of the cultural and political official discourse. This course approaches the post-revolutionary process through literary and visual production, stressing the tensions, contradictions, and debts of the Mexican Revolution, in particular to the countryside including campesino and indigenous groups. Prerequisite: SPAN 102, placement, or consent of the Professor.

This course explores Latin American literary texts and films, produced after the 70's, that address political issues related to marginal subjects that were not previously visible in literary texts. This course will show students new approaches and criticism in contemporary cultural and political history of Latin America. The course is organized around several different agendas such as "indigenismo", ethnic politics and indigenous movements, postcoloniality, subalternity, sexual diversity, migration and the border, drug trafficking, and gender violence. Prerequisite: 102, 201 (preferred), placement at 200 level or the consent of the Professor.

The 1968 Mexican student movement and its tragic repression in Tlaltelolco revealed that the project of Modernization, the so-called “Mexican Miracle”, as well as the authoritarian political practices of the official party (PRI) could not fulfill social and political demands of the population. By focusing on literary texts and films, this course examines how the ‘68 movement changed political and social practices of civil society. How intellectuals responded by addressing (or avoiding) issues such as state violence, the youth and generation gap, gender and gay rights, and how contemporary culture revisits the ‘68 movement after 40 years. Prerequisite: 200 level course, or the consent of the Professor.

This course addresses the issue of memory and the tension between truth and fiction. A selection of reports, documents, and visual archives are compared with literary genres including testimonio, memories, diaries, poetry, and fiction writing. This course also examines the coup and dictatorship of Pinochet, with the repression of the student’s movement of 68, and the guerrilla warfare in Mexico. Prerequisite: A 200 level course, or consent of the Professor.

This course explores connections between the socialist armed struggles in the 1970s, women’s rights and feminist movements in Latin America. Through the comparative study of literary texts, testimonials and documentary films, the course addresses theoretical issues such as the relevance and limitations of Marxism and Feminism, global feminism, hegemony and feminisms produced in the periphery. The course provides a general background of different models of the armed struggle in the Southern Cone, Central America, and Mexico, focusing on women’s narratives, memory and the construction of the meaning of this past. Prerequisite: A 200 level course, 300 level course (preferable) or consent of the Professor.