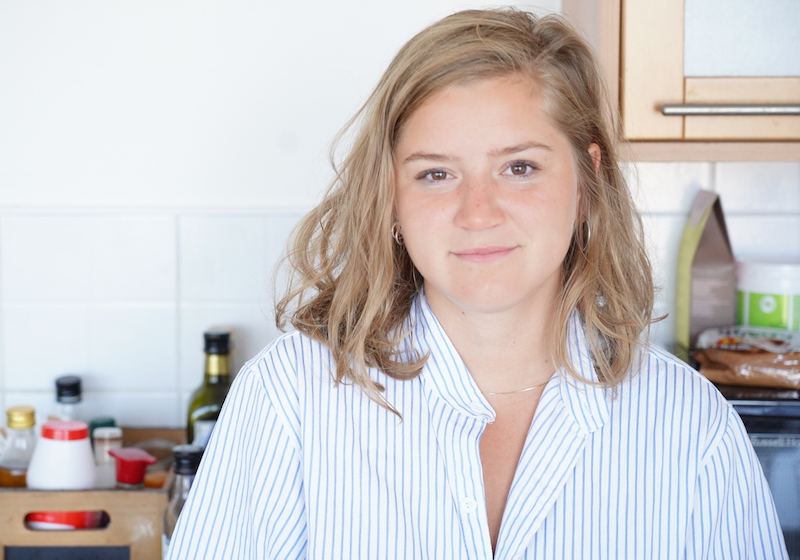 My favorite class I've taken during my time at Haverford has to be a poetry workshop I took in the spring of my freshmen year. Being exposed to the potential for such vulnerability in an academic setting pushed me to reconsider how present I felt in my studies up until that point and how much more present I could be. Since then, within the english major, I've read texts that have greatly affected my being and have opened me up to a constant reconfiguration of my perspective. In the fall of my sophomore year I took a course concerned with pre-18th century American literature. As I continued to write papers that consistently veered towards analyses of gender and sexuality, it became clear that gender and sexuality are topics that prompt me to self-reflect, and therefore engage more deeply with my learning. Gender and sexuality studies have helped guide me to texts, conversations, and essays that preserve vulnerability in my learning and ground the potentially abstract realms of the humanities within a frame I can attach to my life experience and perspective.

I chose to study english initially because I was drawn to the opportunity to learn about the world and it's many concepts through literature and grapple with the idea that fiction and literature can act as conductors and symptoms of eras and cultures. I chose to minor in french after taking a year of it to satisfy the language requirement and realizing how good it felt to try to speak in another language and to realize I could try to open up my world through that language. Little did I know how many canonized literary theorists are french, and that studying the language and its literature alongside english texts would prove so beneficial to my conceptualization of language and how it operates. Within both my major and my minor, I've been consistently geared towards studies of gender and sexuality, an attraction I attribute to an intense curiosity I have in regards to my own experience of womanhood and my relationships to other people.

Two experiences that significantly changed my perspective and approach to my classwork were the summer after my freshmen year spent with High Rocks Academy in West Virginia and my last summer before senior year spent with the Institute of Avignon, a bi-co study abroad program. While at High Rocks, I was taught by the young women who ran and participated in the non-profit's programming to reevaluate my perception of rural communities and to valorize the unique Appalachian culture. I worked as an intern at their residential summer camps and not only witnessed, but felt the power of inspired young people when they take control of their narratives, are given the resources to work hard for what they want, and know their infinite worth. Being a part of the High Rocks community showed me how an organization might attempt to destabilize gender inequality within a specific context, while also demonstrating how specific gendered experience is, not only to a region, but to each individual. When thinking about my own gender studies, working with High Rocks helped me reconsider essentializing theories of womanhood and work into my studies an awareness of rural communities in general. For my thesis, I'm working with Margaret Atwood's semi-autobiographical text, "Cat's Eye," and studying how the text engages the feminine, specifically how Atwood creates images of the feminine that complicate the patriarchy's organization of gender. While writing on these topics, I have found myself coming back to the importance of analyzing "the feminine" within specific gendered experience and refrain from generating damaging or exclusionary conceptions of a universal experience. My time in Avignon was an opportunity for me to really dive into the french language and southern french culture. Avignon hosts an immense theater festival for three weeks in July. I was able to attend about a dozen plays spoken in French and was completely wrapped up in the festival. Actors advertised their shows in all the streets, passing out fliers, singing, soliloquizing, dancing, and totally overwhelming the small town with their exciting and dynamic presence. In terms of future plans, returning to the south of France to potentially teach is absolutely one of them.

I think what has most surprised me about the trajectory of my studies is how dynamic my areas of interest have remained, while I've also developed a very evident focus. I can be in a class about surveillance and digital bodies, a french class about the 18th century libertines, deep into theoretical readings for my thesis, and performing a monologue from Dom Juan all in the same week, and can trace each experience over the other to create an ever messier, yet ever more substantial way for me to understand the world, and my gendered experience within it. Allowing materials from one class affect my understanding of another is of course the liberal arts dream, but the many different ways I can study a field has surprised me nonetheless.

I hope to have the opportunity to teach somewhere, whether that be in France or somewhere in the states, and eventually study law in graduate school with the hope of using that degree and knowledge to expand modern conceptions of civil rights.