The OSCC was previously called Eighth Dimension (8D). 8D was founded in 1978 by a group of students, professors, and administrators to integrate experiential learning into Haverford’s curricula and culture.

In 2018, 8D was renamed in honor of the late Marilou Allen, to celebrate and continue her legacy, and also to make more clear the work and purpose of the office.

Marilou Allen served the Haverford College community for over 30 years by supporting students on campus and connecting them to community service opportunities.

Allen joined Haverford's staff in 1981 for what was supposed to be an 18-month appointment as the director of 8th Dimension, the College's community outreach office. She stayed for 34 years. In 1982 she was tasked with founding the Haverford College Women*s Center, and she worked directing both offices until her 2015 retirement.

Created as the College transitioned into a co-educational institution, the Women*s Center served as an important support for female students in the previously all-male environment and provided a place on campus focused on issues of gender, sexuality, sexual health, and women's rights. As its mission evolved into serving students across the gender spectrum and became more intersectional, Allen made sure its services, programming, and resources grew with it.
Allen's relationship with Haverford goes back many years before she became an integral member of its administration. A lifelong Ardmore resident, she first worked on campus cleaning professor's houses.

In 1964 she helped launch Serendipity Day Camp, an inexpensive summer camp for local families that was—and is today—held on campus. She served as the camp's director from 1984 until her retirement.

During her tenure at Haverford, Allen also served as one of the College's Equal Opportunity Employment officers and Affirmative Action officers. In those roles she was an invaluable resource for staff and a force for equality across the community.

Allen attended nearby Lower Merion High School and earned her B.A. and M.A. from Antioch University. She also earned her MSLP from Bryn Mawr College's Graduate School of Social Work and Social Research. In addition to her work at Haverford, she was director of program services of the Girl Scouts of Greater Philadelphia for seven years, and her decades of extensive volunteer work included work with the Girl Scouts as well as From All Walks of Life, Eldernet/Lower Merion Coalition of Aging, the United Way, and the Ardmore Avenue Community Center. 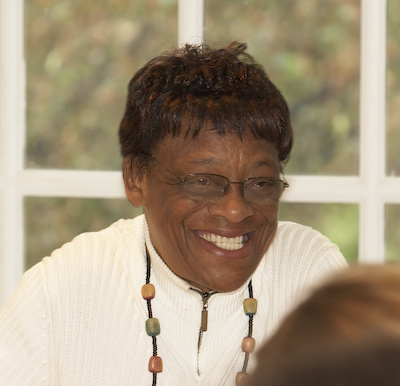