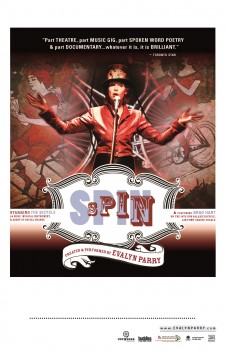 SPIN, celebrating the Bicycle as muse, Â¨musical instrument and agent of social change.

evalyn parry is a Canadian Quaker, and an award-winning musician, poet and theatre artist. Her interdisciplinary performance works, inspired by a deep commitment to social justice, explore themes that range from 19th century cycling heroines to bottled water, from queer identity to the quest for the Northwest Passage. Whether accompanying herself on guitar, water bottle, shruti box or loop pedals, or joined by a percussionist playing an amplified bicycle, parry's unique work has been performed all over North America, and been widely broadcast, commissioned and anthologized; she has released four critically acclaimed CDs, and directed, written and acted in numerous original theatrical productions. In her hometown Toronto, evalyn serves as the director of the Young Creators Unit at Buddies in Bad Times Theatre, mentoring and directing young queer artists in the creation of solo performance. She has lead workshops at colleges and universities, community, professional arts and Quaker organizations across the US and Canada, using writing, music, movement and theatre to explore diverse themes, and to give expression to the unique creative voice within each of us. evalynparry.com

Other Opportunities to Meet with evalyn

(in addition, Evalyn will be visiting classrooms, student groups, and meeting with students individually. To schedule an opportunity for yourself or with your student group, contact wsulliva@haverford.edu)