Founded in 1776, Phi Beta Kappa is the oldest undergraduate academic honors society in the United States. Haverford College's chapter, a private organization founded in 1898, is one of about 300 chapters located at some of the most widely-respected institutions of higher learning in the country.

Each April a selection committee composed of Haverford faculty, administrators, and alumni members of the Phi Beta Kappa Society elects a number of graduating seniors to the Society; the number of students chosen typically does not exceed 10 percent of the graduating class, and in no case does it exceed 15 percent. The committee also elects a small number of juniors, ordinarily no more than 5, every year. Election is based almost entirely on the basis of a student's academic record. The selection committee examines the transcripts of the approximately 50 seniors and 15 juniors with the highest cumulative grade point averages in their respective classes, and in so doing, it seeks to identify those who have exhibited depth and breadth of academic interest. It is the hope that this qualitative analysis of student records will ensure that election represents not just the attainment of strong grades but, more importantly, originality, creativity, and a sense of excitement about the life of the mind. 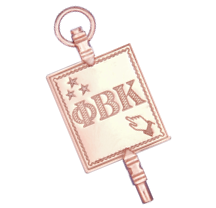