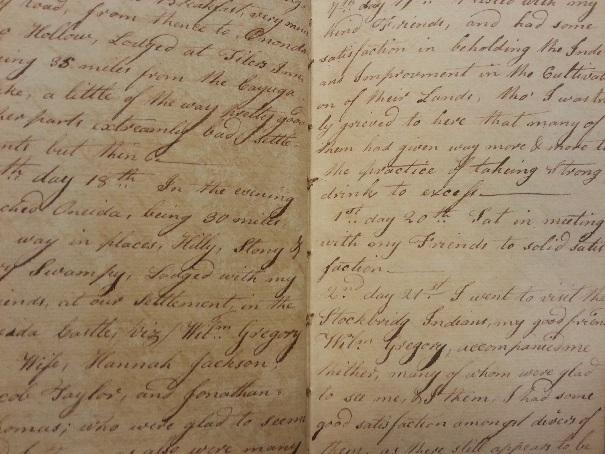 In her second news item in the "Hidden Collections" series, Kara Flynn focuses on a few items within the Quaker collections that highlight the QuakerÍs involvement in Native American rights.

As I wrap up my second month working with the Quaker collections, I've been going back over the collections that I've worked with to write my second month update, and struggling to narrow my focus to just one or two collections. This is in part because the sheer volume of the material is impressive, to say the least, but more importantly, I've been struggling to determine which collections to highlight in this post because there is such a wide variety of intriguing sources in the Quaker material here at Haverford.

As I've worked with these collections over the past two months, I've quickly come to realize that, historically, Quakers had their hand in everything! And, I think this is what makes the collection so potentially useful to researchers, whether they are students, academics, or genealogy or history enthusiasts. To illustrate this point, I've decided to focus on a few items within the Quaker collections that highlight the Quaker's involvement in Native American rights. While it is more or less well-known that many Quakers in early American history were among the country's first abolitionists, I was unaware of the early and impactful involvement that Quakers had with Native American tribes, particularly in New York and Pennsylvania.

I have worked with two diaries in particular over the past months that provide an interesting insight into Quaker's relationships with Native Americans and vice versa. In 1798, five Quaker missionaries traveled to the Seneca Nation to instruct the members in husbandry and to establish a school. These men were three young men; Henry Simmons, Halliday Jackson, and Joel Swayne, as well as two Quaker elders, John Pierce and Joshua Sharpless. At the mission established by the Quakers, the men built a model farm to teach adult Seneca about building, farming, and animal husbandry, and a school to teach both adults and children English. The diaries of Joel Swayne and Henry Simmons provide two different accounts of this Quaker mission to the Seneca Nation, and are therefore interesting to consider both as separate sources, but also as personal accounts and experiences of a single mission.

The first is the diary of Joel Swayne written from 1798_1800, and entitled "Some Account of my Journey to the Seneca Nation of Indians and Residence Amongst that People." Entries describe Swayne's journey to the Seneca Nation, and the two years he spent there. Swayne provides detailed descriptions of the chief, "Cornplanter," the chief's family, the village and villagers, cultural differences he observes between the Quakers and the Senecas, the difficulty of the language barrier, and discussions between Quaker missionaries and Seneca members. Intriguingly, after Swayne recounts a lengthy speech made by Cornplanter, Swayne notes that Cornplanter's command of English was actually not so good, and thus, Swayne could not understand what had been said. Now, one could assume a translator had stepped in, enabling Swayne to write a record of this speech, but beauty of primary sources like Swayne's diary, are that they allow us to see firsthand the way in which history gets recorded, and provides us with the opportunity to think critically about the history we think we know.

The second diary collection that I wanted to highlight is the diaries of Henry Simmons, which date from 1796_1800. Henry Simmons traveled extensively in the U.S. as an Indian Agent among many different tribes, but his first experience with Native Americans was the mission to the Seneca Nation that he made alongside Joel Swayne. Henry Simmons established and ran the school near Cornplanter's village, and like Swayne, he records speeches made by both the Quakers and by Cornplanter. In addition to descriptions of his duties as a teacher, Simmons describes interactions between himself and the Senecas outside of school, particularly as concern discussions of Christianity. Interestingly, Simmons had fewer years of formal education than the other men on the mission, and taught school.

In addition to these two collections, Quaker and Special Collections also has the Associated Executive Committee of Friends on Indian Affairs, which can provide the institutional counterpart to the personal experiences of the mission to the Seneca that Swayne and Simmons record in their diaries. Drawing on these three sources; one official recorded history and two personal experiences from individuals with different backgrounds, allows for the creation of a richer historical understanding of this period in general, and of the Quaker Mission to the Seneca Nation in particular.

For me, the diaries of Joel Swayne and Henry Simmons really exemplify the resources available in the Quaker collection. They reveal not only the wide variety of topics covered by these collections, but they also show the way in which collections under the Quaker umbrella are interconnected, making for potentially even richer sources of information than a single diary or collection might be able to provide.