Book of the Month: Paradise Lost 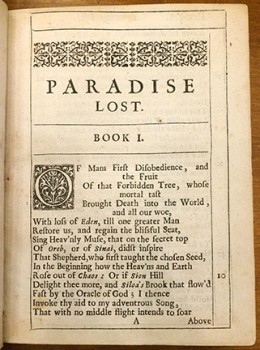 Published
Share
The first edition of Milton's Paradise Lost was in 10 books, not the 12 we read today, and a copy can be seen in Quaker & Special Collections.

First published in London in the year 1667, John Milton's Paradise Lost has been regarded as the most significant epic poem of the English language, reflecting traditional aspects of epic poetry that define Homer's The Odyssey and Virgil's The Aeneid while adapting to a more progressive and critical world view. Born 1608 in London, Milton's family history already compelled him towards reformist religious views; his father had been disinherited by Milton's strict Roman Catholic grandfather for reading a Protestant bible. In turn, Milton's literature reflected a Puritan criticism of Roman Catholicism, support for freedom of worship and tolerance for dissenters. Milton was politically progressive as well, rejecting tyranny and advocating for republicanism and freedom to divorce. He was an intelligent and very well educated man; he was proficient in Greek, Latin, and Italian, received both his Bachelor of Arts and Master of Arts from Christ's College in Cambridge, and studied independently for six years after graduating. While his education originally was geared towards joining the ministry, Milton never took that path, perhaps due to the contentiousness of his theology.

Paradise Lost, in the tradition of epic poetry, embraces grand themes such as the struggle between good and evil, embodied in the heavenly battle between Satan and his followers and the Son of God and the obedient angels. Milton tackles issues such as the distinction between God as the embodied Son and the omnipresent deity, and the multi-faceted nature of Satan as a charismatic leader as well as the cause of mankind's downfall. Along with following the power struggle in heaven, Paradise Lost chronicles Adam and Eve's brief existence in Eden and their subsequent temptation and expulsion, while foretelling aspects of humanity's future, such as the flood and the redeeming sacrifice of the Son.

Haverford's Quaker & Special Collections houses a first edition copy of Paradise Lost, published in its original structure of 10 books as opposed to the more commonly known 12 books of the revised and augmented 1674 edition. This edition also includes supplementary pages added by the publisher, including an explanation of the verse and lack of rhyme, a list of â€˜Errata' correcting errors in the printing, and brief summary â€˜Arguments' of each of the 10 books. Our copy has been re-bound, due to the excessive deterioration of the original calf-skin binding.