Growing Up in Science: A Conversation with Prof. Patrese Robinson-Drummer 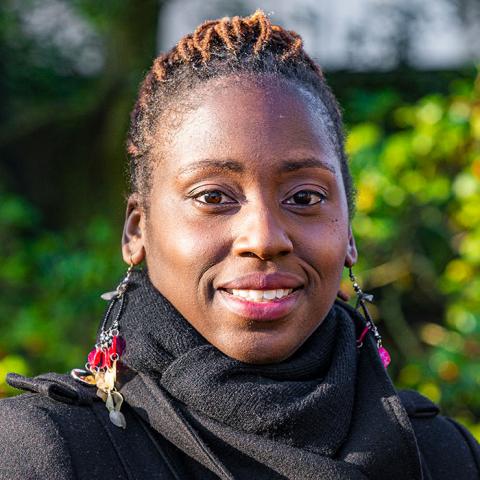 This fall the KINSC continues its Growing Up in Science conversation series with Professor of Neuroscience Patrese A. Robinson-Drummer, moderated by Prof. Ryan Lei.

Growing Up in Science invites scientists to share their personal narratives, struggles, doubts, successes, detours, as well as answer your questions.

Patrese A. Robinson-Drummer is a Philadelphia, PA native. Prior to becoming a neuroscientist, Patrese was interested in veterinary medicine and attended the University of Delaware as a pre-vet major. Part way through her undergraduate studies, she realized her interests were more aligned with understanding animal behavior and joined a developmental behavioral neuroscience lab, under professor Mark Stanton, where the research focused on understanding the development of hippocampus-dependent memory using rodent models. After graduating from UD in 2010, Patrese decided to follow her newly developed interest in animal behavior and was accepted into the Experimental Psychology MS program at St. Joseph’s university. In collaboration with her advisor Dr. Matt Anderson, Patrese researched how lateralized behavior in Waldrapp Ibis (housed at the Philadelphia Zoo) were correlated with social behaviors in those birds. After completing her MS in 2012, Patrese returned to the University of Delaware to further study the ontogeny of learning and memory and the effects of early life exposure to teratogens (e.g. neonatal alcohol exposure) on developing hippocampal systems. Her research characterized a change in plasticity mechanisms linked with fetal alcohol exposure and associated with disrupted learning during contextual fear conditioning while also proposing a novel mechanism by which alcohol exposure may impair certain types of contextual learning via prefrontal-cholinergic dysfunction. Patrese completed her dissertation entitled “Ontogeny of contextual fear conditioning: Behavioral, neuropharmacological and molecular mechanisms” in the winter of 2018 and joined Dr. Regina Sullivan’s developmental lab at the New York University Langone School of Medicine/Nathan Kline Institute as a postdoc research fellow. The research at NYU focused on the neurobiology of infant attachment and the critical role of the caregiver to regulate infant learning, emotion and response to stress and how learning in this infant-caregiver system can be disrupted with caregiver abuse. Additionally, a research collaboration through NYU with Dr. Gordon Barr at the Children’s hospital of Philadelphia allowed Patrese to also explore the effects pre-natal opioid exposure on developing sensorimotor, affective and spatial learning systems. In the winter of 2020, Patrese joined the Haverford community as a visiting faculty member before being offered a tenure-track position in July 2021. Her current research focuses on the development of hippocampus-dependent memory using incidental learning paradigms in Long-Evans rats and how early life abuse may disrupt the typical development of this learning system.

Growing up on the North side of Philadelphia in the 90’s, Patrese saw the importance of family, community and education first hand. Neither of her parents had college degrees but both emphasized the importance of knowledge, faith and having tough skin to reaching beyond the barriers of inner-city life. Beginning in elementary school, Patrese was supported by teachers and family members to join academic clubs and explore an interest in animal medicine rarely cultivated in young black girls from her part of the city. Patrese carried this sense of community and motivation into her undergraduate years where she joined and later became vice president of the Black Student Union while also working for and becoming a member of the undergraduate minority student science group called NUCLEUS. As a graduate student, her passion for serving the community and exploring neuroscience collided when she became the co-founder of Project: BrainLight, a graduate student-led volunteer group whose mission was to use neuroscience to expose young students to science experiences they may not typically receive, and are from communities traditionally underrepresented in higher education and STEM fields. In addition to traveling around Delaware and Philadelphia, Project: BrainLight hosted an on-campus fair where middle school students from the community could learn about neuroscience and the different disciplines that contribute to this field. This experience was transformative and solidified Patrese’s desire to work with developing scholars and she hopes to bring these types of neuroscience experiences and commitment to community to Haverford.