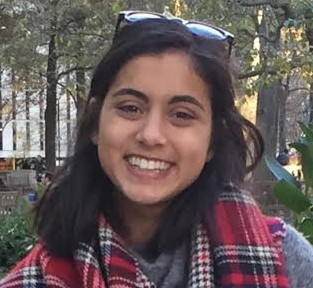 Seher’s thesis will focus on public transportation. She hypothesizes that no more than a small proportion of the monthly Uber ride increase from June 2015 to October 2016, from 5 million to 16 million (Fitzsimmons & Hu, 2017), were new consumers of the travel industry as a whole. If this hypothesis is correct, then where did they come from and what method of transit is being substituted by Uber?

Having a father who is an economics Professor at Bard College seeded senior economics major Seher Sethi ’18 with thoughts of going to a small liberal arts college with the possibility of majoring in Economics. Growing up, her father framed decisions in terms of opportunity cost regularly in his parenting.  As a result her interest in why people make the decisions they do grew into an academic fascination. According to Seher, using data analysis and quantitative methods to puzzle through why people make the decisions they do, and seeing data tell a story are prime benefits of studying economics.

Seher will also graduate with a minor in Computer Science, a curriculum that strengthened her study habits. She has never been as challenged in a subject as she is in computer science. It advanced her problem solving skills while incorporating creativity dexterity.

Having grown up in Tivoli, New York (near Woodstock), in 11th grade she moved to Westtown School in West Chester, PA as a boarder. It was there that Haverford College showed up on her radar. After visiting numerous small liberal arts colleges on the East Coast, she was sold on Haverford because students have a strong voice. Plenary, Honor Code and Haverford’s focus on character development are in strong alignment with her values.

Seher has practiced and applied economics in the workplace. The summer following her sophomore year Seher interned at Central Hudson, an energy company in the Mid-Hudson River Valley region.  She worked with the Digital Experience team, an initiative to engage customers in energy efficient practices, teaching them about green energy, how to track their usage history, and more.

This past summer she worked with the Growth Team at New York City’s Via Transportation. Via is a young start-up technology company that provides an inexpensive on-demand transportation system to the general public. Seher helped with pricing strategies as well as mapping out and tracking consumer usage patterns.

Seher’s thesis will focus on public transportation. In the past seven years, ride-sharing apps have emerged as a staple in many consumers’ lives. From June 2015 to October 2016 alone, monthly Uber rides increased from 5 million to 16 million (Fitzsimmons & Hu, 2017). This rapid increase has directed intense media attention towards the practices of ride-sharing companies, their motives in the transport market, and legislation surrounding the industry. While these topics are all vital in the understanding of ride-sharing, they all focus on the supply (and its possible restrictions) and business strategy of ride-sharing companies. Seher will focus on the demand-side of ride-sharing services. Ride-sharing has revolutionized an industry that has been relatively stagnant (Winston, 2000) for the past many years, and much of that has to do with changing consumer behavior. What is it about the Uber product that consumers are drawn to? Where did those 11 million people emerge from between June 2015 and October 2016 (Fitzsimmons & Hu, 2017)? She hypothesizes that no more than a small proportion of them were new consumers of the travel industry as a whole. If this hypothesis is correct, then where did they come from and what method of transit is being substituted by Uber?

Seher works with the multicultural recruitment team in the Admissions Office of the college encouraging 1st generation, low income students to visit the campus. She helps arrange the logistics of travel, lodging and itineraries. She also spearheaded “Ford Explorers”, a club that collaborates with Student Council and the Student Engagement Office, aimed at introducing Fords to public transportation and exploring inexpensive activities in the city.

Post-graduation Seher will eventually go back to school to earn an MBA. In the mean time she would like to join a late stage start-up firm working on a business strategy team. She is open to exploring many venues as she looks forward to this next stage in her life.