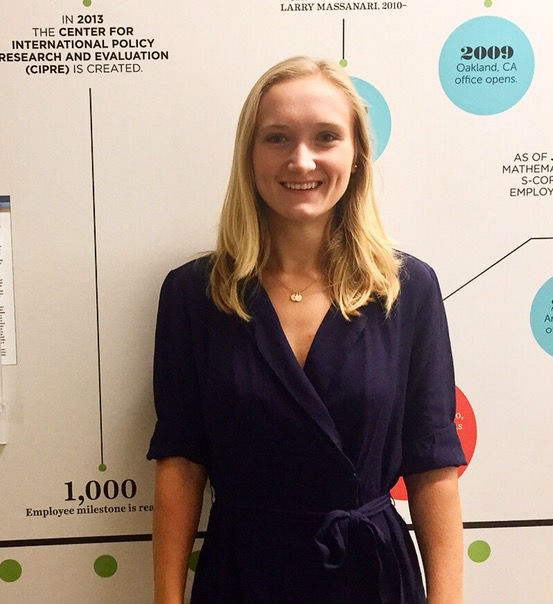 In her thesis, Madison Jones '18 would like to determine whether countries who have policies regulating and limiting internet use result in reduced incidences of terrorist activity.  There has been much discussion of the difficulties in regulating the use of social media and the internet by terrorist organizations, and the legal implications behind doing so.

Madison Jones ’18 was contemplating majoring in English or Political Science until she took Introduction to Economics with Professor Anne Preston. Gauging that economics has the brawn to reward her with the most career options, she declared the major with a minor in psychology. Having slight concerns that her challenges in mathematics might impede her performance, she adjusted her outlook and dove into the course work with great success. In fact, Introduction to Econometrics with Professor Preston has emerged as being one her favorite courses, math and all!

An avid lacrosse player, she ruled out Division I and Division II colleges, with academics being top priority. She hadn’t heard of Haverford College during her high school years as a student at The Lawrenceville School. It wasn’t until Haverford College’s (at the time) Lacrosse Coach Lauren Wray recruited her. After visiting campus, it immediately became one of her top three choices.

In addition to being co-captain and a defender on the lacrosse team, Madison works with James Kenyon in the athletics department handling the game day score boards.  She’s also a Teaching Assistant for economics Professor Eric Gaus, and she volunteers as an economics Peer Tutor.

Madison has enriched her course work by interning during the summer months. The summer following her sophomore year she worked for Braithwaite Communications in Philadelphia. It was a constructive experience, and she ascertained that the public relations industry is not the right path for her. That same summer she enthusiastically returned to her high school alma mater where she was contracted to teach writing classes and tutor summer students, preparing them for the boarding school experience.

The summer after her junior year Madison interned at Mathematica Policy Research as a legal intern in Princeton, New Jersey. She learned about government contracts, policy and initiatives. She primarily worked on software licensing and copyright documents. It was an invaluable experience working with a small in-house legal team with exposure to legal agreements and research methodology. In fact, she has decided to follow in her father’s career footsteps with plans of going to law school. After she graduates she has her sights on working as a legal assistant or a paralegal for two to three years, after which she will apply to east coast law schools.

In her thesis, Madison would like to determine whether countries who have policies regulating and limiting internet use result in reduced incidences of terrorist activity.  There has been much discussion of the difficulties in regulating the use of social media and the internet by terrorist organizations, and the legal implications behind doing so.  Research shows that terrorist organizations are not only encouraged by media attention to commit further acts of terror, but also that international media attention serves as free advertising and propaganda for terrorist groups by spreading their message and spurring recruitment.  If she finds that stricter internet regulation leads to decreased terror attacks, the argument could be made that restricting internet use and content on all citizens, rather than solely targeting terrorist users, could be an effective counterterrorism strategy.  However, there will remain major legal implications, especially in the United States where arguments about freedom of speech and human rights violations would be likely to occur.