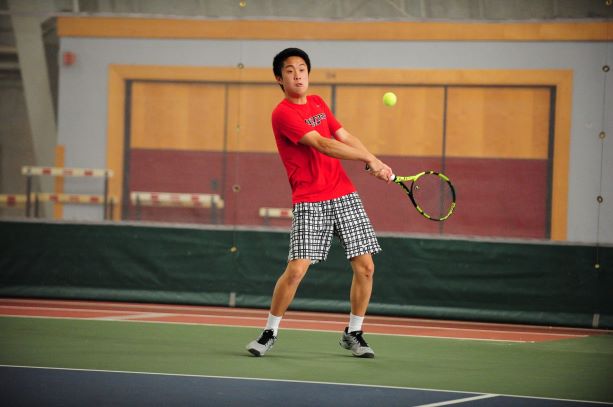 Kevin Yan ’20 visited numerous colleges before choosing Haverford College.  Having graduated from a small high school in Basking Ridge, New Jersey, where tennis was an important part of his life, he was looking for a college with high academics, where he could play tennis.  Haverford’s tennis Coach, Sean Sloan, who has since retired, contacted Kevin and invited him to participate in an overnight visit with the team. He felt that Haverford exuded a super friendly, warm and welcoming aura, with interesting and smart people!

History was most appealing during high school, especially a class that had an economic bent that included the study of human decision-making. His father has a Ph.D. in Economics, and economic principles were featured in his home life.  Therefore, declaring a major in Economics felt like a natural path. Classes he has taken that stand out are two Junior Research Seminars; Professor Saleha Jilani’s International Trade, and Professor Shannon Mudd’s Access to Finance. Kevin will matriculate with a major in economics and a minor in mathematics. He recognizes that mathematical concepts offer a strong complement to economic theory and its applications.

Being productive during his summer months has given Kevin hands on experience in the banking, financial management and accounting industries. The summer after his freshman year, he was employed by Banco Santander in Hong Kong in their Operational Risk Department. He teamed up with colleagues creating procedural reports. He and his co-workers achieved their goal of reducing incidents of errors and glitches in company practices.

He returned to Hong Kong the following summer interning with the Corporate Financial Management team at KPMG. KPMG is an audit, tax and advisory firm, and Kevin was tasked with interpreting newly implemented accounting rules. He was asked to assess what would change and how those changes would impact shareholders. He enjoyed the comradery, spending time with the other interns, working on collaborative projects.

This past summer Kevin lived in New York City, employed by CohnReznick, an accounting tax and advising firm.  Interning in their Financial Management division, Kevin worked with a cloud based financial software platform, systematized data, and implemented changes for clients.  He enjoyed connecting with his colleagues and he ‘loved’ New York City!

Kevin has played on Haverford’s tennis team all four years, competing in both doubles and singles. His freshman year, he won the school’s Archibald MacIntosh Award and has been an all-conference player in singles and doubles for 3 years straight. Additionally, last year, during his Junior year, Kevin served as a Peer Awareness Facilitator, assisting first year students in adjusting to their new home at Haverford College.