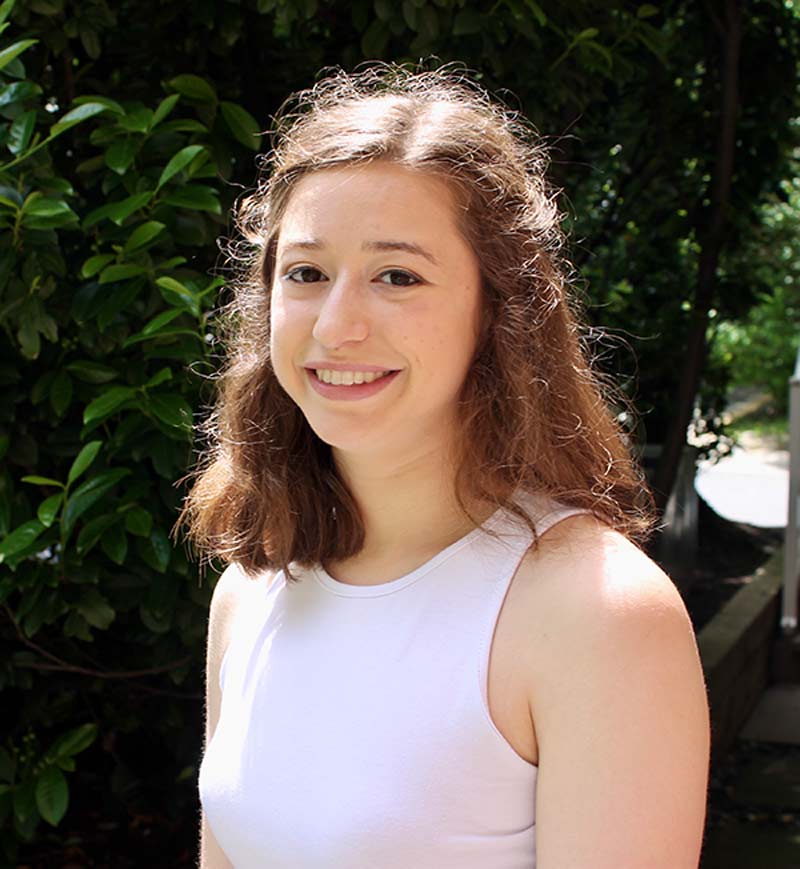 Haya’s thesis studies present-biased preferences and procrastination. For example, on Monday someone thinks that they'll write their paper on Tuesday, but by the time Tuesday comes around, they decide to push it off.

Most interested in small liberal arts colleges, Haverford was one of many institutions on Haya Goldblatt’s ’22 radar as she wrapped up her high school years. She didn’t want to go to school too far from her Chevy Chase, MD (Washington, DC) home. As she amassed information on small colleges, institutions with a reputable dance program narrowed her pool of options. Haya’s passion for modern dance, ballet and jazz were key motivators in what college she would attend. After visiting Haverford she felt a connection with the community, and Honor Code resonated with her philosophies. Haya applied early decision.

Since Fall of 2018 Haya has been a member of Shift Dance Company, a bi-co student led dance company where she has been a Co-Head, board member, choreographer and dancer. It’s a forum in which dancers work on their own technique, come together for rehearsals, and perform at public events.

She had plans of majoring in economics even before she got to college. With a strong interest in quantitative subjects (math, and such) she had taken an economics class in high school where she learned that economics studies not only economies, but also people, behaviors and the world. Its broad application and interdisciplinary nature has made being a part of the economics department at Haverford a delightfully rewarding experience.

In addition to a Major in Economics, Haya will earn a Minor in Philosophy. In Professor Joel Yurdin’s class, Happiness, Virtue, and the Good Life, Haya encountered the same logical thinking, and similar problem solving techniques, that she uses in economics and mathematics classes. The philosophy minor has been a valuable complement to her major.

ECON201 Analytical Methods for Economics introduced her to Professors Giri Parameswaran and Carola Binder. After conferring with a peer who had worked with Giri the previous summer, she reached out to him about a Summer 2020 Research Assistant position for herself, an experience that resulted in co-authoring a draft of a paper. Subsequently, Haya has taken a number of classes with Professor Parameswaran, including independent study seminars that have been challenging, giving her the opportunity to, and the experience of, reading and critiquing professionally published economic papers.

Haya’s thesis studies “present-biased preferences and procrastination. For example, on Monday someone thinks that they'll write their paper on Tuesday, but by the time Tuesday comes around, they decide to push it off until Wednesday, even though it's less convenient to write it on Wednesday. This example demonstrates the type of self-control problem that's associated with being present-biased—doing work in the future is more attractive than doing it in the present. There are various mechanisms that can be used to overcome those self-control problems. For example, when people have the ability to self-impose binding deadlines leading up to a large assignment, they often choose to set those deadlines in order to stop themselves from procrastinating. [Haya is] testing the extent to which making a detailed plan and receiving reminders about the plan can reduce procrastination problems. [She is] running an experiment to test the hypothesis that planning and reminders can be effective tools to reduce procrastination.”

Summer internships reinforce curricular studies. Working as an analyst for Cornerstone Research this past summer, Haya, among other things, analyzed datasets, summarized findings in a variety of arenas, and researched competition in the pharmaceutical drug pricing market. Haya has accepted a full time analyst position in Boston with Cornerstone Research. Congratulations Haya!

Speaking of how things unfold and evolve, Haya has historically posted her summer positions on her LinkedIn account, which has resulted in people reaching out for guidance on securing internships. Haya’s response to this need has been to organize on-going panel discussions on internships, where students share their summer experiences. The panel discussions are well received and students have been eager to sign up to share their knowledge.