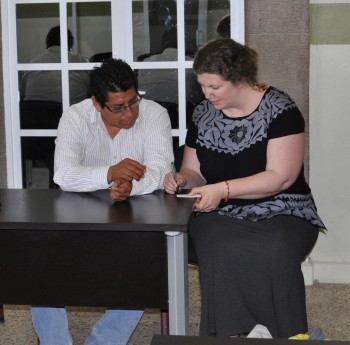 Assistant Professor of Linguistics Brook Danielle Lillehaugen (right) traveled to Oaxaca, Mexico, with three of her students in April to present the Zapotec Talking Dictionary to the Town Council of Tlacolula de Matamoros.

Published
Share
Assistant Professor of Linguistics Brook Danielle Lillehaugen and her students have created the Zapotec Talking Dictionary. Their aim: to help save this endangered language of Mexico.

As a Haverford assistant professor in the Tri-College Department of Linguistics, Brook Danielle Lillehaugen helps her students analyze modes of human communication in such courses as“Introduction to Language and Linguistics” and“Phonetics and Phonology.” But Lillehaugen's passion for her subject goes beyond the classroom. She's actively involved in fieldwork with speakers of the Zapotec language of Mexico, one of the thousands of“endangered” languages around the world, considered at risk of disappearing.

With the help of her students, Swarthmore colleagues in the linguistics department, and Zapotec collaborators, Lillehaugen has developed the Tlacolula Valley Zapotec Talking Dictionary, an online resource that allows users to see definitions and listen to the native-speaker pronunciation of this Zapotec language, one of an estimated 40 such regional varieties. The dictionary is supported by National Geographic and the Living Tongues Institute for Endangered Languages.

Lillehaugen began her work on Zapotec as a graduate student at the University of California, Los Angeles. She started out assisting a professor who was working on a Zapotec dictionary, and when another group of Zapotec speakers reached out to ask if they could collaborate on something similar, she suggested Lillehaugen take on the work herself.

“As I began developing the project, I started working with Zapotec teachers in L.A., and I started going to Oaxaca to do fieldwork and to meet the families of my teachers,” she says.“I really grew to love Oaxaca, and now I get to bring my own students there.”

During the summer of 2013, two of her students, Helen Felker '16 and Alex Mannix BMC '15 (who are both credited as coauthors on the dictionary), received funding from the Center for Peace and Global Citizenship to intern at a museum and cultural center in San Pablo, Oaxaca. The internships, which were arranged by Haverford graduate Nicholas Johnson '03, an anthropologist who lives and works in Oaxaca, included an opportunity to help create materials for a Zapotec language class for children, and to do Zapotec language-related fieldwork. Also traveling to Oaxaca that summer, to assist Lillehaugen with her fieldwork, were Katie McCormick BMC '13 and Swarthmore student Caroline Batten, who are also both listed as co-authors of the dictionary.

This past April, Lillehaugen took three students to a conference in Oaxaca City, where they presented the Talking Dictionary to the Town Council of Tlacolula de Matamoros and discussed ways to collaborate on expanding the project. The result: Alex Mannix is returning to Oaxaca this summer, funded again by the CPGC, whose“continuing connection” internships allow students to resume work begun the previous year.

“We had a very, very positive reaction to the dictionary from the community,” says Lillehaugen.“So Alex will be training people this summer to take over actively growing it. We want to leave part of the project in the community's hands, so they are not dependent on us.”

Lillehaugen is especially pleased to have connected with a woman in Oaxaca who plans to use the dictionary in the Zapotec language classes she is teaching for adults.“In the town where I work, the youngest speakers of the language are in their 70s,” says Lillehaugen.“The town Alex will be focusing on this summer has speakers who are in their 30s, but the kids tend to shift to Spanish when they get to school.”

Though Spanish is key to functioning in the larger economy in Mexico, the erosion of native languages has also been a function of discrimination, Lillehaugen says.“It's needless. People can be bilingual. But native people have been actively discouraged from speaking their own language.” That may be changing, though, she says.“There is now a public-service campaign in Mexico that tells people that these native languages are real languages.”

The number of speakers may be small, but the work of trying to keep these languages from disappearing is important, says Lillehaugen.“There are probably about 7,000 languages in the worldâ€”most of which linguists have not described. If we really want to understand what human language can be, we have to base our theories off the broadest possible set of languages. What if you were studying trees? You could not understand what trees are if you only saw 10 percent of trees.“Also, a lot of our knowledge about how humans understand the world shows up in language. When you look at the names for plants and animals, and even locations, in a particular language, you see knowledge systems encoded. If you lose a language, you are losing an understanding of a way of being in the world.”