What's New at The HaverFarm? 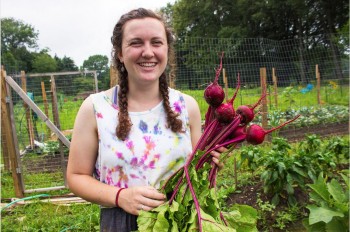 Growing interest from students in sustainable, local food has led to an on-campus, student-run farm, which supplies food to Dining Services and a weekly farm stand.

Plump little raindrops sat precariously on the lush green leaves of dragon kale and balanced on perfectly round green tomatoes. Bees skipped from one brightly colored yellow sunflower to another the shade of mustard and deep orange. Despite the dark gray clouds and the imminent threat of rain showers, the plants looked healthy and happy at the HaverFarm.

HaverFarm is the name for both the student-run club and the plots of land where food is grown: one behind HCA's apartment 19, a smaller one behind HCA 22, and the third, larger space behind the facilities and maintenance building. It was born out of an environmental studies senior capstone class project in 2013, and, since then, has grown to include the construction of a new greenhouse and the hiring of an inaugural farm fellow. These exciting new developments reflect growing student interest in sustainable, local food systems and Haverford's ongoing commitment to going green.

Aubrey DeLone is the farm fellow hired by the college. She starts work on July 20, under the supervision of the environmental studies program. DeLone will be responsible for maintaining the greenhouse, publicity and outreach for the farm, and expanding what and where its produce is grown.

Construction of the new greenhouse, which will also be attached to a small classroom, will begin in August. The environmental studies capstone class initiated the idea for this greenhouse—the campus' second, after one that is managed by the Arboretum—but its imminent construction was bolstered by the support of Assistant Director of Facilities Management Claudia Kent, Assistant Professor of Chemistry Helen White, Presidential Chief of Staff Jesse Lytle, and Alanna Matteson '15.

Matteson has not only been very active at the farm, but also started the new Beekeeping Club along with fellow apiary enthusiast Dana Duncombe '16. "The bees are great!" says Wingate. "The farm group is totally on board with them because [bees] help the farm a lot."

Adrian Galbraith-Paul, a local farmer, also offers consultation to the HaverFarm. Wingate is working with him and Shoshana Rybeck, a high school student (and sister of Gabe Rybeck '16), this summer.

Wingate has supplied freshly harvested kale, arugula, and lettuce to the College's Dining Center and The Coop on a weekly basis. She hopes to be able to supply more produce to campus food providers as the harvest season extends into the year.

Students, staff, and faculty also have access to the farm produce, which is sold every Thursday by the HCA apartments for students and every Friday near Founders courtyard for the rest of the Haverford community. These farm stands accept donations, which Wingate uses to buy more seeds.

By the time students return to campus in the fall, the farm will be brimming with ready-to-be harvested produce. With a growing farm and new environmental initiatives springing up on campus, Wingate hopes more students will become involved in greening activities on campus. She also plans to organize simple workshops where students can make use of the bounty by making their own fresh basil pesto or learning to pickle cucumbers and other vegetables.

"When I first got here there was no farm," she says. "[But] I've seen it grow into a more structured space. Hopefully more people will know it exists."

Explore a full gallery of photos from the HaverFarm on the Haverblog.