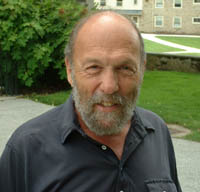 "If you're a graduating senior," begins the outgoing voicemail greeting, "please pronounce your name slowly and clearly two times.”  And if there's a secret to Prof. Aryeh Kosman's success, the voicemail solution is it.

As Faculty Marshal at Commencement, Kosman reads the 295 names of those who'll walk across the stage.  And with just two weeks to learn how to pronounce each senior's name correctly and with the proper inflection, all seniors are expected to phone his voicemail and do their duty at the sound of the tone.

On this day in early May, he plays one of the recordings then repeats the name twice. And while many might regard this particular name as hopelessly challenging, Kosman will learn to say it just as the student prefers. Now only 294 more to go.“What's a poor boy supposed to do?” he implores with wide eyes and raised hands.

But Kosman is not a“poor boy” in this arena, as he knows several languages and can easily adopt accents, though when asked about which languages he speaks, he laughs.  â€œI don't speak many languagesâ€¦I fake many languages.”

As he points out, there are many ways to pronounce one name; even one that is seemingly easy could prove to be tricky. To avoid the possibility of confusion or a mistake, he writes down the phonetic pronunciation of each name along with something it rhymes with. Why does he do it?“It's a lot about vanity on my part,” he admits, though it's also about the students; Commencement is an important part of life – for them, and for their parents -- and Kosman wants to get it right.

He assumed this job twenty years ago“because somebody had to do it,” but enjoyed it so much (and is so good at it) that it he is on track to own it for life. Kosman points out that students don't always know the proper pronunciation of their own names, and so, transitioning from orator to genealogist, Kosman will research its proper pronunciation. This often occurs due to the lost legacy of heritage, and so for a student, learning how to say a family name correctly can become a reconnection to this ancestry. He has been praised by many grandparents for recovering this proper pronunciation.

While there have been few mishaps, they do occur. But with so many names to read, a few flubs would seem like a good night to anybody else. Most memorable of these occurred when instead of reading the student's name, Kosman read the rhyme he had put beneath it. This Sunday at commencement, however, was yet another chance to prove his dedication to this uncommon yet critical job, as he took on the challenge of pronouncing so many names just-so.