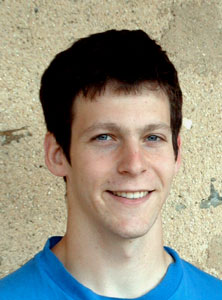 Published
File Under
Share
Ethan Roland '04 receives Watson Fellowship to study the genetic diversity of apples around the world.

“The Watson Fellowship is the most fantastic thing you can do after college,” says Haverford senior Ethan Roland, one of 50 recipients nationally of this year's award. Created in 1968 by the Thomas J. Watson Foundation, this prestigious fellowship“gives college graduates of unusual promise the freedom to engage in a year of independent study and travel abroad,” according to the foundation's website. Unlike typical academic work, a Watson Fellow's project is completely self-run. They must conceive of and carry out their research independently.

For Roland, the award is more than an opportunity to engage in his academic interests. It is a chance to carry out his family legacy. Roland's mother, a 1976 graduate of Swarthmore, was also a Watson Fellow, making him the first second-generation recipient. All throughout his childhood, he heard stories of his mother's global travel. Adds Roland,“My mom definitely persuaded me to apply for a Watson.”

Roland will study the genetic diversity of apples around the world. A genetic trait known as extreme heterozygosity has allowed apples to thrive in diverse climates. Heterozygosity is the possession of multiple versions of a single gene. This diversity allows the apple to match itself to ecosystems around the world. His project will take him to Sweden, Kazakhstan, Japan, New Zealand, and Chile. Says Roland,“Kazakhstan is really the heart of my project.” An apple tree forest there is believed to be the origin of the domesticated apple.

“This topic came out of a couple of things,” Roland states. He cites The Botany of Desire, a book by Michael Pollan that retells the story of Johnny Appleseed.“It changed how I thought about apples. Roland, a biology major with a special interest in computer science, adds,“I wanted to include hard science in my Fellowship.” He believes the emphasis on genetics distinguished him from other applicants and helped him secure the Fellowship. Last summer, he worked alongside food experts at UC Davis, which increased his interest in biodiversity, organic farming, and sustainability.

Besides studying their genetic components, Roland will also work with apples as a food and as a source of income internationally.“I will get to know the people who work with apples everyday.” These include scientists, independent growers, and small orchard owners, and mass producers. He credits his father, a former restaurant owner, for his role in inspiring this aspect of his research.“In terms of getting me to think about food, my father was influential.”

When he returns, Roland will plant the apple seeds he gathered on his journey in his home in upstate New York to see if they thrive. He also plans to collect his travel journals into a publication. However, Roland is most excited about a website for apple researchers he intends to design. The site will include international research, along with the recipes he obtained during his travels. It will connect people who study apples around the globe, because,“there is not as much communication between countries as there could be,” Roland says. He anticipates the challenges of adjusting to foreign cultures and attempting to communicate with the local populations. He also recognizes,“This experience will shape me more than my career.”