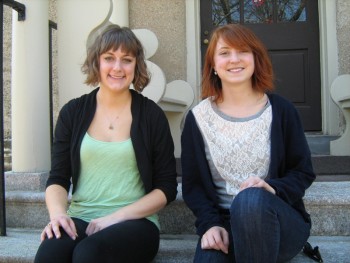 Seniors Alissa Aron and Isobel Grad have been awarded Watson Fellowships, which fund a year of independent exploration and international travel for just-graduated college students. They are among this year's 40 awardees, selected from a pool of 148 national finalists. Watson Fellows come from select private liberal arts colleges and universities, and receive $25,000 to subsidize an independent project undertaken during 12 months of travel outside the United States.

Aron, a chemistry major, will travel to Italy, Spain, Portugal, France, New Zealand, Argentina, Chile and Uruguay to explore the intersection of science and art in the world of winemaking. Though she abandoned her dreams of a Watson Year after dismissing her initial food-related proposal, she reevaluated her application after an“a-ha” moment over the summer inspired a newfound interest in vinification.“I went winetasting [in Washington], and I heard this woman talking who was using all these chemistry terms,” says Aron.“And because we'd been winetasting for a while I was more talkative than normal. So I went up to her and [asked], â€˜Are you a chemist?' She said, â€˜No, I'm a winemaker.' And things sort of clicked for me. I thought, â€˜I could do that. That's like chemistry, except with wine, which is my other favorite interest besides food.'”

Grad, a sociology major and environmental studies concentrator, will travel to Iceland, Greece, Madagascar and India to study the social value of local food systems. She is interested in how those systems support local ecological stability, create community ties and place a country in a global context.“Food is such a mundane thing,” she says.“You can't get around without it. You need it. But there's so much complexity that goes into it. Who made it? Where did it come from? How did you cook it? Why does it taste the way that it does? Why do you like what you taste? It's everything, but it's so basic. It's fascinating.”

Steven Watter, the senior associate dean of the college and dean of student life who has acted as the college's liaison to the fellowship for 25 years, says that he's noticed that Haverford Watson Fellows tend to be deeply interested in their field of study.“It's as though the person and the project are virtually inseparable,” he says. He is proud of the longtime success of the College's nominees to the program (60 since 1973 when the College began nominating students for the program).“For me it's such a delight and honor to work with such outstanding students who have so much to offer the world,” he says.

Two Haverford graduates, Madeline Kreider Carlson and Tim Richards (both '10), won Watson fellowships last year, and are currently in the middle of their own yearlong projects. Kreider Carlson has been studying the art and socio-economic impact of women's crafts in Guatemala and Egypt (where she witnesses this year's revolution), and is currently in Uganda. Richards has been exploring community approaches to environmental sustainability in Australia, Scotland and Portugal, and is currently in India. You can follow their progress on their respective blogs: http://madabroad.wordpress.com and http://sustainablephilosopher.wordpress.com.

The children of Thomas J. Watson, Sr., the founder of International Business Machines Corp., and his wife, Jeannette K. Watson, established the Thomas J. Watson Fellowship Program in 1968 to honor their parents' long-standing interest in education and world affairs. In its 43-year history, more than 2,600 people have embarked on a Watson Year, which provides fellows an opportunity to test their aspirations and abilities and develop a more informed sense of international concern.