Trumpeting the Class of 1998 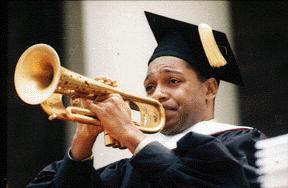 Published
Share
The sweet sounds of jazz mingled with warm words of advice as 300 students received their undergraduate degrees during Haverford's annual commencement ceremony on Sunday, May 17.

In picture perfect weather, doctor of humane letters recipient Wynton Marsalis told the graduates the colorful story of the first time he ever tooted a note from his trumpet. It was in an empty New Orleans lot under the magical ear of his teacher Danny Barker. He recalled he was one of five children that day who squawked their way through a song on different instruments. Three decades later, Marsalis flawlessly played the same tune for the graduates on his trumpet. It was a lesson in the magic of teachers, patience and potential.

"All of those musicians who played in that band when we were eight and nine are all still playing New Orleans jazz today, and a lot of them are the best musicians who you've ever heard in your life," Marsalis explained. "And that old man could hear that then, and none of us could hear. He's the one that made us understand what the music was about, and he taught us what it meant to hear and to listen."

Lynd, a lawyer, writer, activist and teacher, was presented with an honorary doctor of laws by the college for his lifelong commitment to peaceful social change and empowerment. He was a leading anti-war spokesman during the Vietnam War who accompanied Tom Hayden and Herbert Aptheker during their controversial visit to Hanoi in 1965. After being blacklisted from various teaching appointments at five Chicago-area universities, Lynd became a lawyer specializing in employment law. In the late 1970s he served as counsel to the Ecumenical Coalition of the Mahoning Valley, which served to reopen the steel mills in Youngstown, Ohio under worker-community ownership. He is the author of numerous books on such topics as social history, labor organizations and nonviolence.

Lynd asked the graduates to consider "liberation theology" in their future lifestyles. The theology argues for living among the poor without giving up one's identity. Lynd told the students this type of lifestyle can act as a vital first step in both understanding and giving "a preferential option" to those who are less fortunate than ourselves.

"The underlying concept is that simply by being present, by coming there and staying there, one makes the greatest contribution one can make," Lynd said.

Ogata, a recipient of a Doctor of humane letters from the college, urged students not to forget the thousands of refugees in the world seeking safe sanctuary from violence and opression.

"I think democratic societies have to be inclusive of everybody who is weak, deprived or excluded," Ogata explained. "And, as you move on in your life, just keep in mind that unless you bring the weak or the deprived or the excluded - and I'm pleading on behalf of the refugees here - democracy is not complete. So please, care for the weak as you thrive, have lots of fame and lots of opportunities. Just remember there are always people who have to be helped to be mainstreamed into society."

Gross, host and executive producer of the Peabody Award-winning public radio talk show, "Fresh Air, " was awarded an honorary doctor of letters. She told students not to panic if they haven't yet figured out who they are and where they want to go with their lives. Life has a way of letting people stumble into things they love, she said.

"One more thing I've learned from interviewing guests is that if you're lucky enough to find something that you're passionate about, stay with it even if it's just a pastime, even if it's something you're not getting paid for," Gross explained. "I think we have this feeling in America that you're not allowed to play music, you're not allowed to write unless you're brilliant at it and can make a living at it. And I think that's not true. Anything that gives you passion, that makes you feel good, stay with it. It doesn't matter if you don't get paid. It doesn't matter if it's not your profession. If you love it, it will give you something to live for. It will make your life fuller, and that's a wonderful thing."