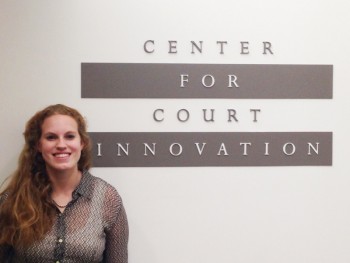 Political science major Tamar Hoffman '16 is in New York this summer working for the Center for Court Innovation [CCI] thanks to funding from the Center for Peace and Global Citizenship.

Political science major Tamar Hoffman '16 is in New York this summer working for the Center for Court Innovation [CCI] thanks to funding from the Center for Peace and Global Citizenship. She is conducting research for CCI's participation in the MacArthur Foundation's new Safety and Justice Challenge, an initiative designed to reduce the jail population in jurisdictions such as New York City, St. Louis County, and Los Angeles County.

“I love the fact that I've been assigned to work on a project that is not only new for me, but is also new for CCI,” says Hoffman.“This means that there is plenty of room for creativityand thinking, and a lot of energy going into the project.”

Hoffman's passion for reforming the justice system was born at Haverford.“The opportunity to take classes such as Professor Barb Toews' 'Restorative Justice and Design,' which is part of the Inside Out Prison Exchange Program, and 'Public Policy Analysis' with [Assistant Professor] Zachary Oberfield has opened my eyes to both the problems and promising solutions in the justice system,” she says.

The College's  proximity to Philadelphia has also been an important part of her education. She says it has given her the ability to stay involved with local social justice organizations, such as the Center for Hunger-Free Communities and the ACLU of Pennsylvania's Duvall Reproductive Freedom Project.

When she returns to campus in the fall, Hoffman, who is also concentrating in Peace, Justice and Human Rights, plans to write her senior thesis about bipartisan efforts for justice reform using her summer experience at CCI to inform her research, and after graduation, she hopes to continue to find a job in the field of justice reform.