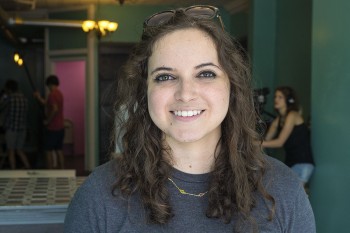 Thanks to funding from HCAH, Sarah Moses '16 is exploring her newfound passion for documentary filmmaking for the second summer in a row.

Inspired to pursue documentary filmmaking by Haverford Artist in Residence Vicky Funari, Sarah Moses '16 is exploring her newfound passion for the second summer in a row. Moses, who is majoring in film and media studies at Swarthmore, spent last summer on Funari's inaugural Interdisciplinary Documentary Media Fellowship alongside three other students, producing a 23-minute film on the oil industry in the Gulf of Louisiana.

"It was one of the more enriching and humbling experiences of my life," says Moses. "[It] solidified my interest in documentary film as a medium through which to explore social and political issues that have always been in the forefront of my mind."

So this year, with funding from the John B. Hurford '60 Center for the Arts and Humanities, she is training her camera on public art in Philadelphia for a film will eventually become her senior thesis.

With help from the Mural Arts Program, she is considering how "mural art subverts and/or delineates socioeconomic and cultural borders in the landscape of Philadelphia." These mural projects are often connected to resource and community centers, such as Southeast by Southeast, which primarily caters to immigrants from Burma and Bhutan.

“Mural Arts is generally thought of as being beautification-focused, but their work—and public art in general—actually has a lot of potential beyond sprucing up an old wall," says Moses. "My hope is to produce a piece that examines the implications of public art while looking at specific communities in Philadelphia."

Moses is also working on a different, Hurford-funded program this summer with Anna Bullard '15, David Roza '15, and Nick Gandolfo-Lucia '16, focusing on business cooperatives in Philadelphia. "There have been a lot of intersections between that project and my public art project," says Moses, "both have provided me with very different ways of thinking about how to visualize the landscape of Philadelphia."