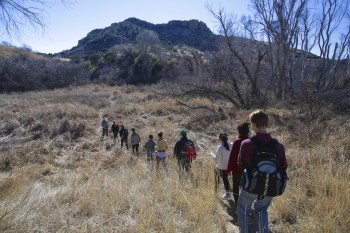 Students hike part of the migration trail in the desert with humanitarian nonprofit No More Deaths.
Photo by David Sanders

Published
Share
Over winter break, nine students got a fresh perspective on immigration as part of a weeklong Borderlands Field Study to Arizona and Mexico sponsored by the Center for Peace and Global Citizenship.

A disturbing scene unfolded before a group of Haverford students inside a musty Tucson, Ariz., courtroom in January.

In the room were 70 defendants, all of them handcuffed. Each had just 30 seconds to hear charges, enter a plea, and receive a sentence in the criminal proceedings against them. Known as Operation Streamline, it is the swift, efficientâ€”and some argue less than constitutionalâ€”system of justice used to deter illegal immigration from Mexico into Arizona and two other border states.

Over winter break, the nine juniors and seniors, along with Associate Professor of Political Science Paulina Ochoa Espejo, traveled to Tucson's federal district courthouse as part of a weeklong Borderlands Field Study. Now in its third year, the collaboration between Haverford's Center for Peace and Global Citizenship (CPGC) and the Earlham College Border Studies Program exposes students to the realities of the borderlands from diverse perspectives.

On this year's trip, the political science, anthropology, and other majors met migrants, Border Patrol agents, activists, and legal experts. What they saw humanized the hot-button issues of immigration and U.S. policies, says Katie Sharar, associate director of the Earlham Border Studies Program, which is based in Tucson. (Earlham College itself is in Richmond, Ind.)

The assembly-line justice at the Tucson courtroomâ€”and the way it seems to compromise the constitutional right to a fair trialâ€”particularly troubled Haverford junior Tamar Hoffman, 20, a political science major from Tel Aviv.

â€œSeeing rows of detained migrants cuffed at the wrists, waist, and ankles, each given 30 seconds of minimal court proceedings prior to receiving their sentence, demonstrates in the most real way the justice concerns with current immigration policy,” says Hoffman, who was the student leader of the group. She also interns at the CPGC, which provided grants to cover the cost of the program.

The trip itinerary included stops at the Border Patrol station in Nogales, Ariz., and the Florence Detention Center, as well as a visit three miles south of the border to hardscrabble Nogales, Sonora. One morning, the group accompanied volunteers with the nonprofit No More Deaths for a four-mile walk in the desert on a trail used by migrants. The terrain is brush-covered and rocky in some places, and lush in other areas with shade trees. Sharar says the path is“actually beautiful.” But she also notes that it can be foreboding, especially if a migrant loses his way or makes the journey in the dark. No More Deaths places water and food along the trail for migrants to find, and offers medical care.

Along the way, students came across a makeshift shrine with pictures of saints and migrants' family members. It was a poignant plea for protection for the rest of the journey, according to Sharar.

“That really brought it all to life,” Hoffman says.

“This experience brings a fresh perspective for most students,” Snowe says.“We want students to understand the realities of cross-border migration.”

The insight, however, doesn't stop at the U.S.-Mexico border. Back at Haverford, participants have a choice of three ways to continue the conversation. They can“intellectually unpack their study tour experience” by taking a class, such as Espejo's“Borders, Immigration, and Citizenship.” Or students can join a migrant discussion group that two CPGC-sponsored Haverford House fellowsâ€”Caya Simonsen '14 and Alexandra Wolkoff '14â€”facilitate. The fellows also help place Borderland participants as volunteers with Philadelphia nonprofits such as Puentes de Salud and the Garces Foundation.

Finally, students can do group projects or summer internships.