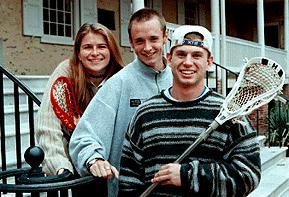 Published
Share
Aspiring to the same success in life that "Mac" himself enjoyed, three members of the Class of 2000 - Rich Billings, Lindsey Carey and Ryan Taggart - have been selected from a field of 24 nominees to receive the Archibald MacIntosh '22 Award for 1997.

MacIntosh was a Haverford athlete and coach who later served as director of athletics, director of admissions, professor of psychology, vice-president and acting president at the College. The award has been presented in his name by the Beta Rho Sigma alumni society to the top scholar-athletes in the college's first-year class since 1964.

Billings, who expects to major in economics, scored an HC-freshman record 18 goals to earn All-Centennial Conference honors in 1996. This season, the graduate of East Greenwich (R.I.) High School upped his career goal total to 35, placing him seventh all-time at Haverford with two seasons to go. Billings says of his MacIntosh, "It really is an incredible honor for me to win this award. The Class of 2000 had a large number of athletes who made significant contributions to their teams during their first year at Haverford. To be selected out of such a talented group is quite an honor for which I am exceptionally grateful."

Carey, a graduate of Towson (Md.) High School who plans to major in mathematics, led the women's lacrosse team last year with 51 goals (including eight in one game at Eastern College) last spring. On the soccer field, the two-year starting defender notched her first collegiate soccer goal on the eve of the MacIntosh ceremony. Of her academic and athletic accomplishments, Carey says, "At first it was difficult to get used to the college work load and play a varsity sport, but I feel like it has made me more successful in school. When you have less time to study, it makes you use that time more efficiently. I feel like I am more organized and more motivated to do school work when I am in season."

A graduate of West Central High School in Chester, N.J., Taggart studies biology and was the Fords' second-leading men's lacrosse scorer last spring with 25 goals and 18 assists. He was honorable mention All-Centennial Conference and is driven to succeed in all his endeavors. "I hate to lose on the field and I hate to lose off the field. Getting good grades is just as, if not more so, important to me than winning games or striving for end of the year honors," he says.

"It's very unusual for the selection committee to pick three winners for the MacIntosh Award, but it would have been impossible to choose between them," said athletic director Greg Kannerstein '63, who was a student at Haverford while MacIntosh was serving as vice-president. "Mac would be proud to know Haverford still has such superb students who are also excellent athletes."