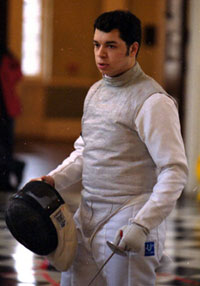 Haverford graduate S.I. Newhouse '03 is featured in the documentaryâ€œBorn Rich,” now airing on HBO. The film, which contains interviews of several young heirs to large fortunes, was directed and produced by a long-time Newhouse friend, Jamie Johnson, himself an heir to the Johnson & Johnson pharmaceutical empire. Newhouse and Johnson grew up together, and both attended the Pingry School where they shared an art class.“Jamie came up with the idea for this film while he was at N.Y.U., and I was a freshman at Haverford,” recalls Newhouse.“It was his first film project, and he asked if I would agree to be interviewed.” The young director interviewed S.I. three times, including once while Newhouse competed with his Haverford fencing teammates during a match at Drew University, and again during his senior year on campus.“I was flattered that he asked me,” says Newhouse.

As a result of his friend's project and the four film courses he took while at Haverford, S.I. says he would eventually like to study film theory. For now, he's applying his English degree and creative writing concentration from Haverford to the world of publishing, specifically through an executive training program at the Times-Picayune in New Orleans.

For a schedule of the remaining days and times to view“Born Rich,” go to the http://www.HBO.com and click on Documentaries.