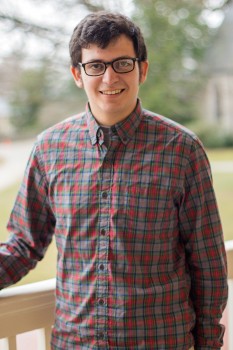 The growth and structure of cities major will work in a New York City agency as part of the nine-month fellowship.

Sam Hersh '15 loves cities, especially how they tick. As a 2015-16 Urban Fellows Program winner, he'll get an opportunity to see the workings of New York City—"the largest municipal government in the country"—up close and personal.

"I think government can, should, and often is a tool for making the world a better place," says the 22-year-old Haverford student from Wilmette, Ill., who is majoring in growth and structure of cities at Bryn Mawr College. "The opportunity to work with the New York City government, which is not only the largest municipal government in the U.S., but also pretty often a lab for policies—and policy challenges—that eventually reach other cities, was something I couldn't resist."

Sponsored by the City of New York, the nine-month Urban Fellows Program exposes students and recent graduates to local civil service. Winners work with city agencies and rub elbows with policy makers. Hersh already has gotten a taste of city government. As part of the strenuous, four-and-a-half-hour interview process, he and other candidates had to solve as a group a "city crisis" in front of city employees and past Urban Fellows.

"Because the interview was pretty long and because you worked with the other candidates, there was a sense of camaraderie that developed by the end of the process," he says. "It was pretty fun."

Hersh says he is looking forward to seeing the real-world ins and outs of city government. "I've spent lots of time in class learning about cities and, in many cases, their governments," he says. "And I've done a handful of internships in which I worked with companies that served city governments.  But this will be the first time I get to see how a city's government functions."