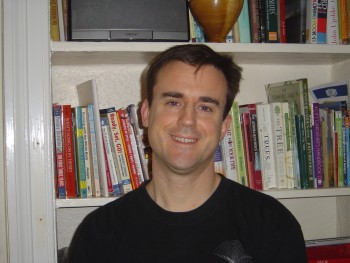 I was a fairly directionless freshman when German pianist Claude Frank arrived to play a recital at Haverford in spring 1993. On the program was a piece I had studied in high school, Beethoven's Piano Sonata No. 32, op. 111. Listening to him play at that recital, I was moved by Frank's performance to the point of being unable to speak.

Piano had been a compelling interest of mine in high school, but it seemed no one had been around to ask the obvious question: If you love music  so much, why don't you really do  it? At Haverford, Professors Richard Freedman, Curt Cacioppo and John Davison were on hand to ask me just this, and to help me make the decision to major in music and go on to study for a master's degree in piano performance at Juilliard.

Juilliard opened the door to all my later experiences, and I practiced relentlessly there for three years. However, at Juilliard and afterward, I met the people who were born to play, and I wasn't one of them. In part, I was running up against my own limitations, but I also realized that one fraction of me was being given expression by performing classical music, while other dimensions were languishing. In particular, I grew interested in the connections between music, movement and cognition, inspired partly by my own mild case of Tourette's syndrome.

During my time at Juilliard, I was introduced to an obscure field called Dalcroze Eurhythmics, which was developed by the Swiss composer and music theorist Emile Jaques-Dalcroze at the turn of the 20th century. In Dalcroze, movement is combined with vocal work and improvisation to create an alternative approach to teaching music. However, musical subjects are intermediate goals, used to develop attention, focus, coordination and physical performance via movement.

In Dalcroze I saw a methodology of unexplored potential that brought all my varied interests together. However, Dalcroze as a profession, to the extent that it exists at all, mostly consists of young children's music and movement classes. To many colleagues, I had abandoned interpreting Schubert sonatas for sitting on a floor with 3-year-olds rolling balls around.

Early in my Dalcroze career I was reverse-commuting to a children's music school in the suburbs (a rite of passage for many a Juilliard grad, in one form or another), where I frequently taught Dalcroze and piano to special-needs and learning-disabled children. I took them on as students because I had a blast teaching them.

However, I began to notice something interesting: The struggles they had executing musical patterns in movement seemed deeply connected to their core special-needs deficits. Similarly, to the extent that these students' ability to execute rhythmic tasks improved, their core deficits seemed to temporarily recede. If I found a way to help a low-functioning girl keep a beat, she would then become just as present as anyone else. If I could tune up a boy's ability to track measure, suddenly he would sit up and listen to an entire sentence. Stepping and skipping the rhythms of a nursery rhyme with these children would result in an afterglow of clear and expressive speech from them where none previously existed. This observation was the most exciting one I ever made. It has been the cornerstone on which I have built everything I have done professionally since.

After several years of using my proprietary application of Dalcroze, which I call Cognitive Eurhythmics, with special-needs children in a clinical practice, I felt I needed a new direction that could help develop my work further and build a solid evidence base. I am now studying for a Ph.D. in medical physics at the University of Edinburgh, in Scotland, studying the use of rhythm and music as therapeutic tools from the standpoint of brain-muscle interaction.

I find I have a hard time explaining to people how going from a master's in music performance to a Ph.D. in medical physics is any kind of straight line. In many ways I suppose it's not, but to me it is all linked together by what I saw when I took the kids nobody wanted, teaching an unknown discipline at a dead-end job.