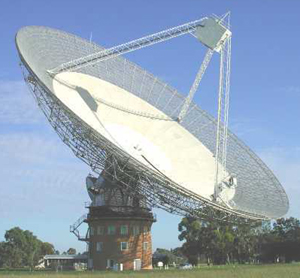 Christmas is coming earlier this year for one Haverford student. The senior astronomy major will be in Australia over the holiday, where he's being given an opportunity few, if any, undergraduates have experienced. From December 6 until January 4, Reid Sherman will be collecting data for an international team of scientists at the Parkes Radio Telescope, one of the world's most important facilities for astronomical research.

Famous for its role in relaying Apollo 11 pictures from the moon in 1969, the Parkes facility is the only such telescope in the southern hemisphere.“It's the only facility in the world that can be used to collect the kind of data that is required for our project,” explained Fronefield Crawford, part of the science team and a visiting assistant professor in physics at Haverford with whom Reid has been collaborating.“ Reid is going to the facility to conduct observations on our behalf,”says Crawford.“I think it's the first time that an undergraduate has been sent to a telescope like the one at Parkes on his own, unaccompanied by a faculty advisor.”

Following some initial supervision by the observatory staff, Reid will be completely responsible for one shift of the telescope's 24-hour schedule. During that time he will collect data for Crawford and other scientists from Canada, England, Italy, and Australia, as well as for other researchers who've reserved time at the observatory for their astronomical projects. Crawford and his colleagues are interested in looking at pulsars â€” collapsed, rapidly rotating stars that are formed in stellar explosions at the end of a star's life – and their potential relationship to gamma rays.“The specific parts of the sky that we are targeting contain gamma rays,” explains Crawford.“We don't know the sources of these gamma rays, but we think they could be associated with pulsars.”

The ability of scientists to collect data on phenomena such as pulsars furthers their understanding of the fundamental structures of the universe and all physical laws, says Crawford, who, like Reid, had the opportunity as an undergraduate to take part in observations at a major observatory.“Even though you can't actually see these objects when you are using a radio telescope, knowing you're the only person in the world collecting that information at that moment is quite magical.”