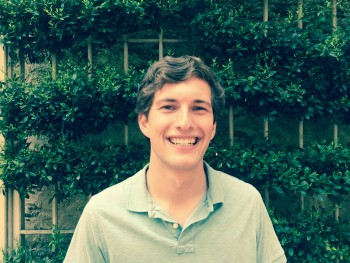 The history and Russian double major will teach English at a university in Russia and also plans to design a creative writing course to help his students practice their skills.

Raymond DeLuca '14, who will be marching down the aisle with his fellow graduates at Commencement on May 18, already has a clear picture of his post-Haverford future. The history and Russian double major has been awarded a Fulbright English Teaching Assistantship (ETA) that will send him to Russia to teach English at a university.

“I also plan to design an extracurricular creative writing course for Russian students to give them an opportunity to practice their English skills more creatively and abstractly,” says DeLuca, who has not yet received his placement, but he knows it will not be in a major city such as Moscow or St. Petersburg.“In order to maximize the depth and breadth of this cultural exchange, the Fulbright committee in Moscow places its ETAs [where people] are less familiar with contemporary American society.”

DeLuca, a native of Red Bank, N.J., already has some familiarity with Russia, having spent a semester abroad studying in St. Petersburg as a junior.“I noticed a real curiosity, especially among young people, about American history, culture, politics, and the English language itself,” he says.“I wanted to find a fellowship following graduation where I could continue and enrich this cultural exchange in Russia.”

DeLuca says the Fulbright ETA for Russia is unique because it is one of the few that require its grantees to have a background in a foreign language.“As part of the application process, I had to conduct an interview in Russian with the folks in Moscow to demonstrate that I had at least two years of language experience,” he says.“Luckily, I have had over three, so the interview went very well. And while I will be teaching English at a university, a familiarity with Russian will be essential to navigate everyday life outside of the school. Russians, generally speaking, are much less familiar with English than most other Europeans.” DeLuca expects his Russian to improve immensely over the course of next year, and plans to take advantage of the language instruction offered by the university where he will be teaching.

DeLuca sees his teaching assistantship as a key first step toward a hoped-for career as a Foreign Service Officer.“Russia is a place that continues to demand critical attention from American diplomats and policymakers, especially in light of current circumstances,” he says.“I hope to be a diplomat, who can kind of transcend a still-pervasive Cold War mentality and engage with Russia more thoughtfully and creatively. Ideally, I would like to become a Public Diplomacy Officerâ€”a diplomat who is on the ground in a foreign country and engages in cross-cultural exchange with foreign business leaders, educators, journalists and policymakers. The work I will be doing as a Fulbright Scholar will directly prepare me for such a position.”