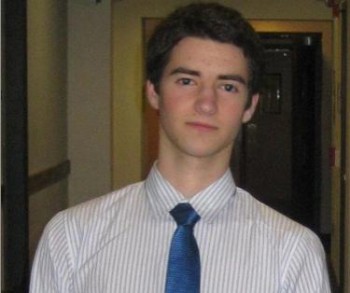 A revised version of a paper he wrote for a sophomore year economics class has been recognized by the Inter-university Consortium for Political and Social Research.

Though the results of Raphael Small's sophomore year economics paper seemed strange at first, they turned out to be significant: they contradicted a wealth of social science research indicating future earning potential is based more on socioeconomic background than education. In fact, Small found that college graduates in 1976 earned about the same regardless of SAT scores, parental education level, parental income, and socioeconomic status. These findings suggest that college worked as an equalizing factor and that socioeconomic stratification was less rigid in the 1970s than today.

This spring, a revised version of Small's paper won second place in the Inter-university Consortium for Political and Social Research (ICPSR) undergraduate research paper competition. Small will receive a $750 prize, and his paper will be published on the ICPSR website.

Established in 1962, ICPSR is an international data consortium of more than 700 academic institutions and research organizations that sponsors a data archive, educational activities, and research projects. It is one of five centers of the Institute for Social Research at the University of Michigan.

Small's paper originated in spring 2013 as a group research project in Professor Richard Ball's course "Economic Statistics with Calculus." "All the papers students did for the course last year were of high quality," Ball says, "but the one written by Rafi and his partners stood out for directness of exposition, clarity of analysis, and meticulous documentation of every step of the empirical work." Ball advised Small as he revised the paper, mainly by editing the 70-page draft down to the 20-page maximum allowed for the ICPSR competition.

Small, an economics major with a concentration in mathematical economics, says that the paper's surprising findings may be due to the sample of individuals he chose to study. The project used data from the U.S. Department of Education's National Longitudinal Study of the High School Class of 1972 (NLS-72), accessed through the ICPSR database. The NLS-72 collected data on tens of thousands of students who graduated high school in 1972, but Small restricted his analysis to those students who also graduated college in 1976. This way, any association he found between socioeconomic status and earnings would not be attributed to different rates of college graduation. However, the selection limited the analysis to a sample of 700. Furthermore, information about participant income was only available for the three years following college graduation. There may not have been enough time for the income differences to manifest.

"Having had this tremendous research experience, in the future I would like to have a similar experience in terms of working and engaging with data to find conclusions and/or test models," says Small, a Haverford tennis player and son of Eric Small '85. "It has made me seriously consider pursuing a Ph.D. in economics."

After returning from a year abroad at the London School of Economics, Small will be working this summer in the Complex Securities Valuation Group of the Valuation and Business Modeling Practice division at Ernst & Young in New York City.