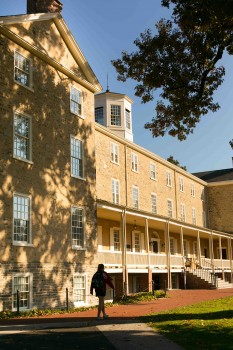 Published
Share
Here's our running list of award winners, which is being updated on an ongoing basis.

Connor Odekirk '15, Stephen Profeta '15 Juliette Rando '15, Lee Rosenthal '15, and Daniel Rothschild '15 have been selected for 2015-16 Fulbright U.S. Student Awards. Odekirk will land in Russia, while Profeta will travel to Turkey. Rosenthal and Rothschild will go to Germany, and Rando is headed to the Netherlands. Haverford's five Fulbright winners this year is the fourth time in 13 years that so many students have won, and ties the college's all-time record.

Geoffrey Martin-Noble '16 has won a Goldwater Scholarship, and Noah Bloch '16 has been granted an honorable mention.

Abigail Sweeney '15 has been offered a Watson Fellowship.

Julian Taylor '18 has been awarded an American Chemical Society scholarship.

Gillian Miswardi '16 has received the Annabelle Dixon Prize from Lucy Cavendish College at the University of Cambridge. This is only the second time that the prize, which is awarded each summer to students who have made the most of their time at the College, has been given to a visitor.