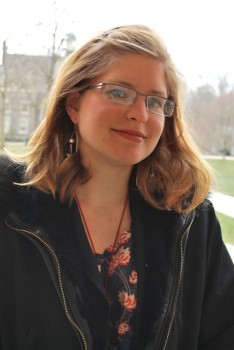 Published
Share
The Russian major has earned the Kathryn Davis Fellowships for Peace, which will fund her summer language program at Middlebury Language School, and the ROSSICA Young Translators Award, a Â£500 prize for her work on Marina Stepnova's The Women of Lazarus.

Pola A. Lem '13 has had a very exciting spring. First, she learned that she had been chosen as one of the 100 recipients of the 2013 Kathryn Davis Fellowships for Peace. Then, Lem received the news that, out of more than 180 applicants, she had won the ROSSICA Young Translators Award.

The Davis fellowship, which aims to address today's critical need for increased foreign language proficiency in the United States, funds tuition, room and board for a summer language study at one of the Middlebury College Language Schools. Lem, a Russian major, will use her fellowship for a second summer of Russian immersion study in Vermont following her Haverford graduation. She will then head to St. Petersburg for a year as a part of the American Council's Russian Flagship Program through Bryn Mawr College.

"After last summer at Middlebury, I noticed that my language abilities were significantly stronger, as was my knowledge of Russian culture and literature," says Lem. "I have to say, my Russian professors in the U.S. have been wonderful. Spending a summer speaking only Russian is the best thing one can do before going to St. Petersburg for a year."

The Russian graduate studies program, which Lem will be attending, is an intensive six-week session, and the students in all the Middlebury Language Institutes take a pledge to only communicate in their foreign language of choice. After returning from her year in St. Petersburg, Lem aims to earn her master's degree in Russian via two more summers of study at Middlebury.

"I believe that language can ignite conflict, fueling violence, but I also believe it has the power to forge connections, unite people and inspire peaceful action," says Lem, who would like to use her Russian language skills to eventually work in either journalism or literary translations.

She already has a head start. The ROSSICA Young Translators Award that she won is a Â£500 prize offered by Academia Rossica, a cultural organization that promotes and strengthens cultural and intellectual ties between Russia and the English-speaking world. Lem earned the prize for her work on a passage from Marina Stepnova's The Women of Lazarus, a recently published, acclaimed Russian novel.