The Personal, the Political 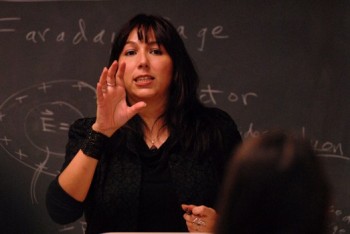 Two of Cristina BeltrÃ¡n's most vivid memories from childhood are related to politics.

The first memory is of a party in the apartment she lived in with her mother following her parents' divorce. Her mother's activist friends were debating Marxism versus nationalism while a Santana song played in the backgroundâ€”â€œI think it was â€˜Oye Como Va,'” says BeltrÃ¡n.

The second is of watching her father, an autoworker turned labor organizer, deliver a talk in Van Nuys, Calif., at his union local (UAW Local 645). Spooked by the crowd, five-year-old Cristina left her chair to go cling to her father's leg.“It probably put a damper on his rousing speech,” she says.

BeltrÃ¡n, who recently became chair of Haverford's political science department, is continuing a family tradition of political passion. While growing up in Southern California during the 1970s, she saw her father assume the presidency of his local union and her mother attend UCLA part time and become involved in feminist and Latino causes. An influential high-school government teacher inspired BeltrÃ¡n to major in politics at the University of California, Santa Cruz, where she blossomed as an activist, joining third-world coalitions, women's groups, and MEChA, an organization that promotes the history, culture and higher education of Latinos. (She was also involved in theater, playing both Titania in A Midsummer Night's Dream and Elizabeth Proctor in The Crucible.“I was the only Mexican-Jewish Puritan ever to grace the stage of UC Santa Cruz,” she says with a laugh.)

Though she didn't realize it at the time, it was at Santa Cruz that Beltran made her first Haverford connection. Chancellor of the university during her years there was Robert B. Stevens, who was president of Haverford from 1978 to 1987.

“We gave that guy hell,” she says of herself and her fellow student-activists.“We were always fighting for somethingâ€”computers for low-income students, or a bilingual phone system for the financial-aid office.”

The first in her family to finish college, BeltrÃ¡n initially believed she'd follow the professional route and apply to law school. But one of her professors, Peter Euben, encouraged her to continue her political science education.“He literally pulled me out of class one day during my junior year and said, â€˜You should go to grad school!'” she says.“I think about that now when I'm mentoring students. You can't wait for them to come to you; if you think your students are amazing, you need to tell them.”

Rutgers University in New Brunswick, N.J., offered BeltrÃ¡n a five-year graduate fellowship, and she and her now-husband Matthew Budman, editor-in-chief of the business magazine The Conference Board Review, moved to the East Coast so BeltrÃ¡n could earn her Ph.D. in political theory. Her dissertation, overseen by renowned theorist Benjamin R. Barber, author of Jihad vs. McWorld, laid the groundwork for her book The Trouble with Unity: Latino Politics and the Creation of Identity, which was released in August by Oxford University Press. In her book, BeltrÃ¡n analyzes key moments in Latino political movements from the 1960s through today.“I'm pushing against the logic that Latinos make up a single community,” she says.“We need to understand the multiplicity of backgrounds and needs of these populations. We can't talk realistically about a single Latino political agenda.”

As Democrats and Republicans battle for the“Latino vote” during this election year, the question looms: Is there such a thing? Yes and no, says BeltrÃ¡n.“Poll data shows that Latino groups as a whole tend to support Democrats on such issues as health care and education,” she says.  But contrast the attitudes of Mexican-Americans in South Texas with those of Cuban-Americans in Miami and you get a different picture.“Any strategies aimed at attracting Latino voters need to recognize the ideological diversity within these various communities,” BeltrÃ¡n says.

BeltrÃ¡n brings some of these ideas to her fall seminar,“Becoming a People: Power, Justice, and the Political.” She relishes the opportunity to link her research with her teaching at Haverford, whose faculty she joined full time in 2001. It turned out to be an emotionally tumultuous year for her: Her mother fell ill and died from complications of polymyositis that spring. Grieving, teaching full time and working to finish her dissertation, she found that the events of Sept.  11 added to the strain, leaving her and her students shaken.

“I really bonded with that class,” she says.“We all pulled together to make sense of our lives and our world.”

Many of BeltrÃ¡n's students have gone on to pursue their own doctorates.“Cristina was an inspiring teacherâ€”deeply engaged, enthusiastic, challengingâ€”and a warmly encouraging adviser,” says Ye Jin Lee '04, who is in a Ph.D. program for political philosophy at Yale.“If not for her suggestion that I pursue my interests at a more advanced level, I probably would not be here.” BeltrÃ¡n's support of her students earned her a 2008 Lindback Distinguished Teaching Award.

In addition to publishing articles on topics ranging from feminist theory to Walt Whitman, BeltrÃ¡n is also in the early stages of her next book, which will examine Latino conservatives and the importance of emotion as it relates to political ideologies.

“First books often have their genesis in the dissertation,” she says.“With this second book, it's exciting to start with a completely fresh idea.”